Whales and a Geyser

It is two years since we visited Newfoundland for the first time. It was only for two weeks, and we could cover only a small part of the East Coast Trail. The amazing friendliness of the people and the unspoilt, spectacular nature made us so enthusiastic that we wanted to tackle another section of this track as soon as possible. 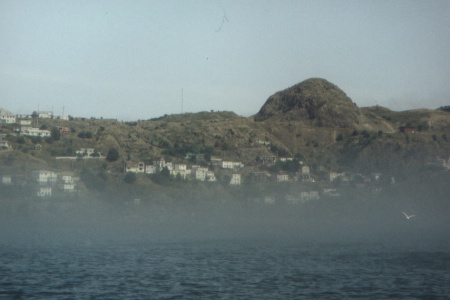 Once again, our luggage was still in Frankfurt, but we were already in St. Johns. So we had enough time to get maps (from 'The Outfitters' on Water Street), to top up supplies, and to sleep off our jet lag.

Before leaving the town, we strengthened ourselves with a 'hungry human' (chips, fried eggs, and bacon). There is very little public transport in Newfoundland, but one can usually reach one's goal quite easily by hitchhiking. So we tried to hitchhike to Blackhead, and had even made a sign with our destination. However, at first nothing happened - it was hot and everyone drove past us. Then a woman explained to us that we had picked a rather bad spot. When we told her where we wanted to go, she simply decided to drive us there. She set us down with the warning ' be careful of the loose stones along the coast'. 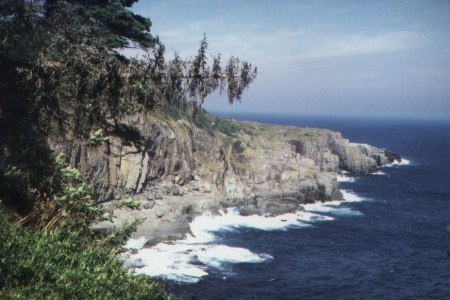 The way from Blackhead to Cape Spear went up and down continuously. So, by the time we reached there, I was completely KO. However, one could not even think of spending the night in the grounds of a National Historic Site. Finally, we stayed the night a couple of kilometres further on - on the edge of a moor. 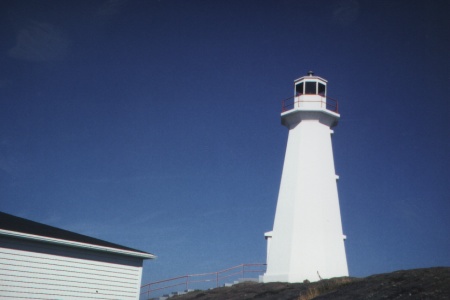 While we were taking our tent down the next morning, two ladies passed by - they were in their seventies, but still in pretty good shape. One of them had come from Germany in the 1950s and was very happy to be able to speak German again. A few kilometres further on, we met the two again and they showed us which were the best berries by the wayside.

We carried on to Petty Harbour - it was incredibly hot and we were looking forward to spending a night somewhere that offered 'bed and breakfast'. Unfortunately, the only place there, the Orca Inn, was already fully booked. The owners were really great - they let us shower, gave us orange juice, watched the Weather Channel on TV with us, and then took us to the beginning of the next part of the trail. 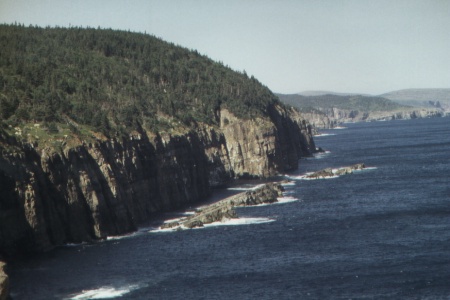 So we again spent the night on the trail. The next day, we reached the Spout - one could hear its roar while still several kilometres from it. Many descriptions of it state that this fresh-water geyser sometimes dries out completely in summer. But it was still erupting. About every 20 seconds, a fountain shot up into the air. I must have taken at least a dozen photos, and each eruption was different to the previous one. The track between Petty Harbour and the Spout is infernally strenuous. It goes up and down, again and again, continuously. 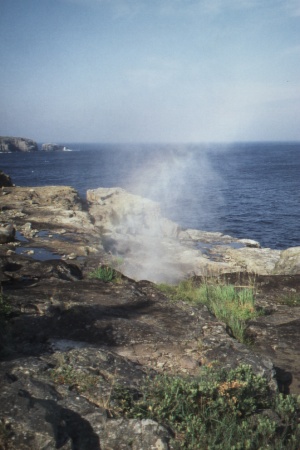 Just past the Spout, there is the Spout camping ground, with platforms where one can set up one's tent. It includes a sensational toilet: one climbs the hill - right at the top, there is a green throne and one has a fantastic view across the bay. 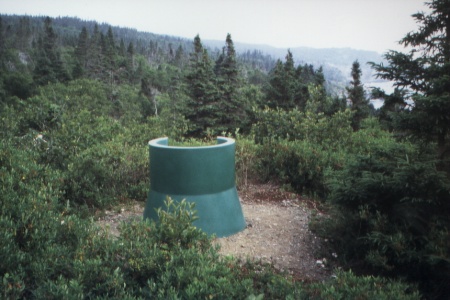 The next day, we made it to Freshwater, which is a deserted fishing village. We set up our tent on the foundations of a house. A river provided fresh water, and the sea was almost right in front of the entrance to the tent. White mallows were flowering everywhere and the smell was fantastic. While we were eating an evening meal in front of the tent, a whole school of whales passed the bay and blew their fountains in the air. During the night, we crawled out of the tent again to look at the perfectly clear sky with its stars. We were rewarded by seeing not only billions of stars but also a shooting-star. 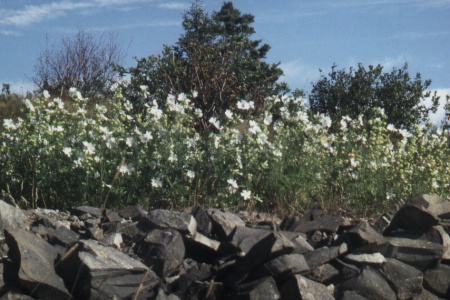 The last five kilometres seemed endless. It was hot and - for a change - there was no wind. The tiny flying and biting beasts were very hungry. 'Bread and Cheese' is located shortly before Bay Bulls. 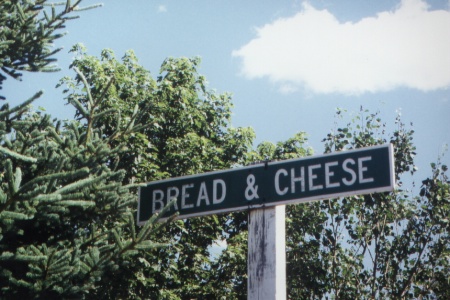 No wonder we were hungry, too. But we couldn't get a room in Bay Bulls, so we spent the night in Wittless Bay. At the end of our hike, we treated ourselves to a boat rip to the Wittless Bay Ecological Reserve. In glorious weather, we didn't see any whales, but we did see about two million birds. We liked the puffins best. They are tiny birds, but brilliant flyers and divers.

It won't be long before we are struck with the urge to visit Newfoundland again and to tackle another section of the East Coast Trail.

To the third (and last) part of the East Coast Trails