Our third summer in Newfoundland

Holidays at last! Full of anticipated pleasure at the thought of a month in Canada, we pack our rucksacks and the kayaks. We go to the airport to check in our luggage the evening before the flight. It was one of those baking-hot evenings in August and each of us carried over 40 kg of luggage to the security control. 'What is the blue liquid in your luggage?' asked the security checker - and I had no idea what it was. Somewhere in the kayak was a liquid - and I hadn't put anything like that in. I felt hotter and hotter, but that didn't help. Unpack! The dried foodstuffs, the clothes for kayaking, but we couldn't find anything. Then the outer pockets - the repair kit for damage to the boat. That was the solution to the puzzle: An adhesive!! The airline had no mercy with us: the adhesive was a dangerous substance - we could not take it with us on the plane.

The next morning made up for the spoilt evening and we arrived in St. Johns without any problems (Reinhold via London and myself via Montreal and Halifax). On our first visit to the Classic Café, the waitress remembered us - 'You have been here before…' - that was two years ago. This time, we wanted to walk the rest of the East Coast Trail. We started in Bay Bulls, and there were no problems on the first stage. From Wittless bay, we went via Mobile to Tors Cove. 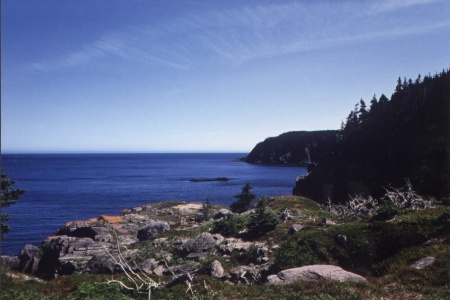 During the first two stages, we could hear whales blowing an incredible number of times. And, when we once again looked for them, the water was full of innumerable black backs - a school of dolphins! We thought there would not be any dolphins so far north. In the supermarket in Mobile, Reinhold had arranged bed and breakfast for us. At the end of the trail, in Tors Cove, the search for the Pond View B&B started. A local resident told us that it was still 2 - 3 km to Highway 10 (uphill). When we finally reached the Highway, I could not remember whether he had told us to turn right, or left and then on the right side. We decided to turn right. When we had walked a kilometre, we decided to ask the way again. Just as the terrible news that it was 3 km in the opposite direction reached us across the fence, a jeep suddenly stopped by us. The owner of the supermarket in Mobile had started to search for us, because we had not arrived at the B&B by the agreed time. He packed us and our rucksacks in the vehicle and took us there! 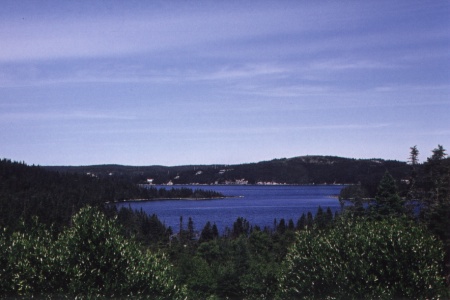 The next section took us from Tors Cove to La Manche village. When we arrived in La Manche, we thought the camping ground was nearby. But this time 'nearby' meant 3 km uphill. On arrival there, we were told: 'We are sold out'! And the next camping ground was quite near (only about an hour further south - by car, of course). 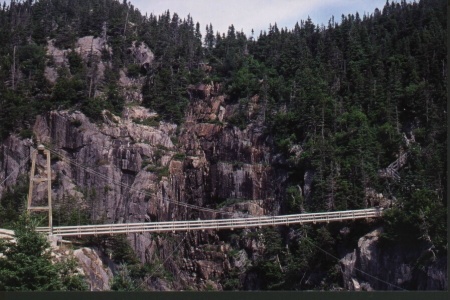 When the ranger saw how much we were carrying, she was prepared to make a deal with us. We could spend one night on a place that had been reserved. The next morning, we went from La Manche to the Roaring Cave camping ground, and then on to Brigus South. From there, members of a hiking club took us with them and searched with us until we found a vacant B&B ('I can't let these people out in the middle of nowhere….'). 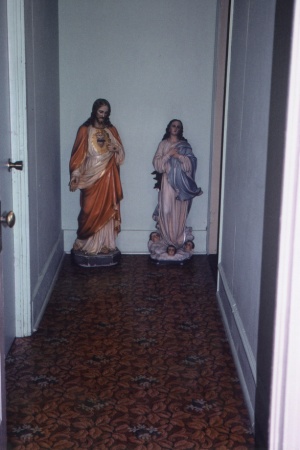 The next day started with a pattering sound on the window, so Plan B - another day in the B & B. Unfortunately, it was fully booked for the next night. However, as usual in Newfoundland, a phone call - and that is how we came to Mrs. Haggan. In her place, there is soup, tea, and home-baked food as soon as one has settled in. We feel sure she would rather sleep in the garden herself than turn anyone away. There was always something happening at her large table. 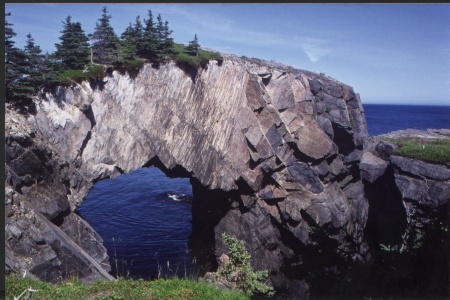 We carried on further, via Kingman's Cove to Renews. Once again, it was rather hot and we were glad when we finally left the trail. At the end of the trail, there is a really great B & B - but, unfortunately, it was full. When Reinhold decided to enquire in spite of this (the owner was working in his garden), the owner first invited us in for a cold beer. Then, while we gradually relaxed, he organised our next overnight accommodation. Our gear was put in the pick-up truck, and he drove us to Cappahayden - the last part of the trail was walked from north to south. 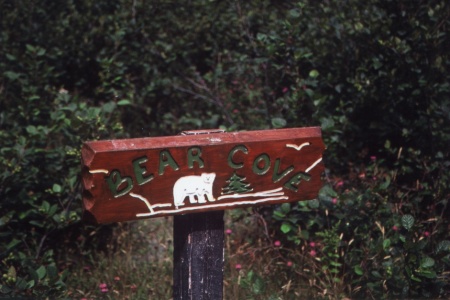 When we started off, it was so foggy that we could use the fog-horn as a guide. In spite of this, the sun came out when we were halfway and it got hot. On arrival in Renews, we were in urgent need of a coke and a sandwich. As we were sitting down outside the supermarket, two Newfoundlanders stopped and invited us home with them, saying 'this is not the place for a lunch break'. The butcher - who specialised in elk and caribou - took us back to Cappahayden. 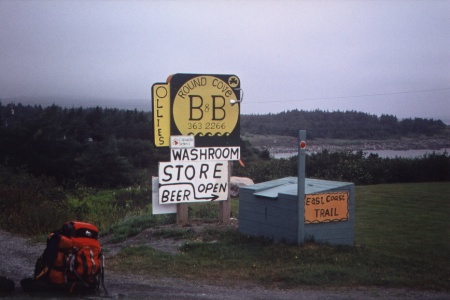 Ten sections of the trail were behind us. Our legs were in urgent need of a rest and the boats were also in need of our attention. The return journey to St. Johns worked out just great. The people who took us with them were a real mixture. We had intended to take the boats out on Conception Bay South, but the banks are very crowded with buildings and the bay is wide and very open. We felt it was a rather boring place to paddle the boats. Meanwhile we had recovered from our exertions, so we decided we would also walk the two missing sections of the East Coast Trail. 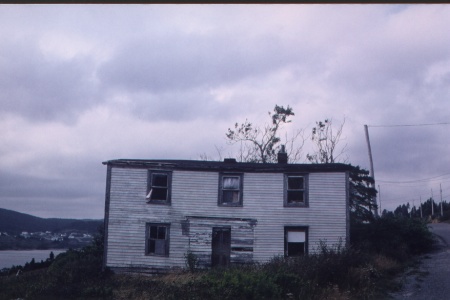 The Brigus South section was almost like a Sunday stroll. Now only one section was missing. It took us a long time to decide whether to walk the Cape Broyle section with or without all our gear. Finally we decided to carry as little as possible and to stay somewhere overnight. The car was parked at the end of the trail and we walked to the start. But the beginning of the trail was not to be found! Where it should have been, there was simply a notice, 'This is not the East Coast Trail'. The whole afternoon was spent looking for the start of the trail. Early in the evening, we gave up our search and phoned the 'Icehouse Meadow'. On arrival there, we found that the promised room was still occupied. Instead, we were offered a beer and tea. The daughter of the house took us back to our car and, on the way, she got us a map of the alternative start of the trail. Oh, and they had also arranged overnight accommodation at the 'Ark of Avalon' for us. 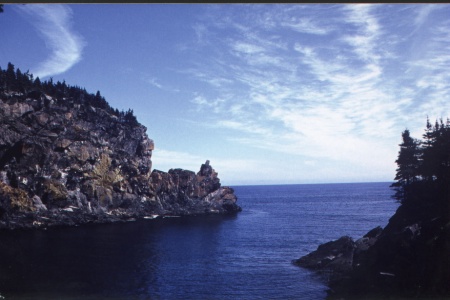 We managed to complete the last section with a great deal of effort and sweat. We are proud to have completed the East Coast Trail. After walking 17 km, there is a mountain to be crossed shortly before the end of the section. After that, the track goes up and down a couple of times, and the last few kilometres seem to stretch out like a piece of elastic.

The East Coast Trail is not yet completed - some day, it will go as far as Cape Race. We were there once and we are looking forward to the next sections. The picture shows the Cape Race lighthouse, which was the first place to receive the SOS from the Titanic and to pass it on. 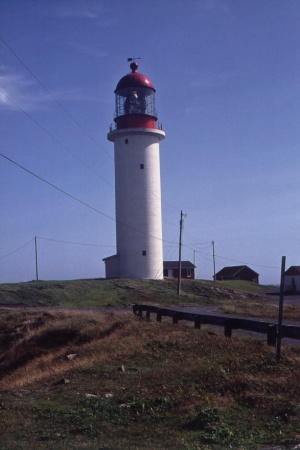