From Bras d’Or to the East Coast Trail

Our holiday started with a few problems. During the stopover in Boston, on our way to Halifax, we were told: 'Sorry, but your luggage is still in Amsterdam'. That meant that we had to wait two days for our luggage.

Halifax, the capital of the province of Nova Scotia, is located on the Atlantic Coast, on a peninsula between the Northwest Arm and Halifax harbour. It's position by the sea is important for the city. A large part of its life is centred around the harbour. The trips to observe whales also start from there. One beautiful evening, we went out in a schooner - we didn't see a whale but we did see a seal playing. And the trip out to the open sea was unbelievably beautiful.

Lobsters and other crustaceans are the speciality of the Canadian Atlantic provinces, so our evenings often ended in a fish restaurant. After our gear finally arrived, we continued our journey - taking the bus northwards. This was a very complicated procedure, with gear which included two folding boats, the paddles for these, and two rucksacks. But the bus and taxi drivers were very friendly and helpful. After a six-hour bus journey we reached Baddeck, on the north shore of the Bras d'Or, a lake which is connected to the Atlantic. Although the water of the lake contains only half as much salt as sea water, it smells almost the same. On arrival in Baddeck, we were faced with the problem of getting to the camping ground (ourselves + 2 folding boats + paddles + 2 rucksacks). The camping ground is 4.5 km from the town - and there is neither a bus nor a taxi. In the end, a friendly employee of the Irving petrol station drove us to the camping ground, which is located directly by the lake. The next day, the weather was wonderful, and Reinhold got quite a bad sunburn while putting the boats together. In the evening, we wanted to paddle, but the wind had become too strong and the water was rather rough. During an attempt to paddle away from the shore, we almost landed in the water, so we postponed the first paddle strokes in salt water until the next day. Instead, we went to Baddeck. 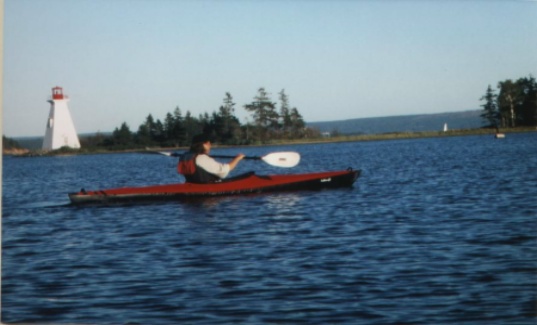 The next morning, the weather was better and we paddled along the coast. Each bay is different. There are numerous different currents in the sea, and a whole series of islands. 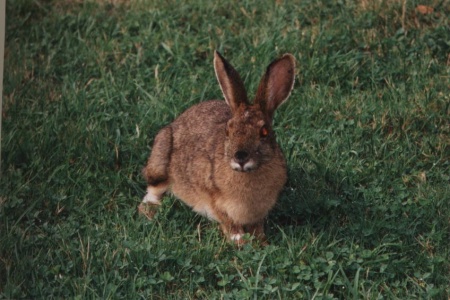 'Come on out, there is a rabbit sitting in front of the tent'. These were Reinhold's first words as he crawled out of the tent the next morning. I thought he was having me on, but there really was a cute little rabbit eating its breakfast. Three days later, we carried on further, in the direction of Newfoundland. We left the boats behind at the camping ground on the Bras d'Or, in order to have less to carry. As we discovered later, this was the right decision. 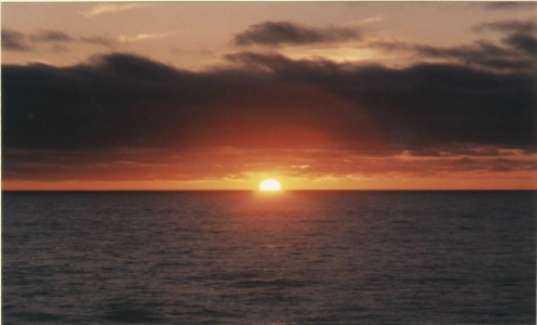 The crossing from North Sydney to Argentia by ferry took 14 hours. Food on the ferry is terrible , and rather expensive - it's better to take a packed lunch.

A gentle layer of cloud hung over the fjord, and I had a feeling that this would be one of those days on which photos for postcards are taken!

The first place we visited was the Visitor Information in Argentia. Where can one get a permit for the Avalon Wilderness Area? That was something we hadn't been able to find out in Germany. One could get a permit in Whitburne, but not until Monday - and today is only Sunday. What shall we do? Where is it nicer, here or in Whitburne? Fitzgeralds Pond Park lies between the two. 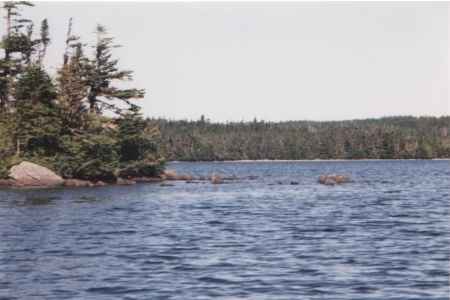 The camping ground is located on a 2 km long pond. It is possible to rent a canoe. Paddling around the pond and to the island in the middle of it is an experience we can thoroughly recommend. When it is dusk, an impossible number of rabbits - of all sizes - scurry to and fro between the tents. In addition, there are lots of squirrels, black woodpeckers, and many other kinds of birds.

From Fitzgeralds Pond to St. Johns

From the camping ground, we took a roundabout route to St Johns, the capital of Newfoundland. There, one of the first things we did was to get an up-to-date map of the East Coast Trail from 'The Outfitters' - that is, we were allowed to take the map to the nearest copy-shop. The next day was hot and very windy - far too hot to start along the trail. So first we did the Rennie River Loop. Through a fishing suburb of St. Johns, we went in the direction of Signal Hill and, from there, over the mountains to Quidi Vidi. This is an old fishing village, on a lake with a connection to the sea. Here there is a little, old brewery - the beer is called '1892', the year in which St. Johns was burned to the ground. It was a hot day, so we dropped into the pub by the harbour. There, Ron Pumphrey came and sat at our table - an author who not only looks like Ernest Hemingway when he was older, but is also similar to him in some ways. He writes biographies of people in Labrador and Newfoundland, and he goes out to sea in an old fishing cutter. Sometimes he takes tourists out with him, and in the underground caverns of the sea. 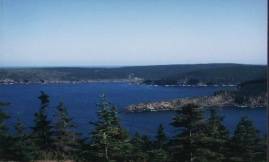 That night, it rained and, the next morning, the weather took a long time to clear. But at last we could start off. A taxi took us to the starting point of the East Coast Trail, near Fort Amherst. But we could not find the beginning of the trail, so we asked everyone who happened to pass. One person did know where it was - by the side of the road, there is a chimney. Nothing remains of the house. The chimney is painted white, and a black man with a paddle is painted on it. From there, a path leads up the slope. The track climbs steeply, through a rock-fall and past the remains of a World War II cistern. For the first few kilometres, several paths cross each other - and they are not always clearly marked. A couple of times, we took the wrong turn and had to go back. However, the descriptions are so good that one usually notices one's mistake quickly and can put it right. The first few kilometres were rather strenuous, but the view across the strip of coast and out to the open sea was well worth the effort. In the afternoon, we came to a lake, which must have been dammed off by an entire family of beavers. 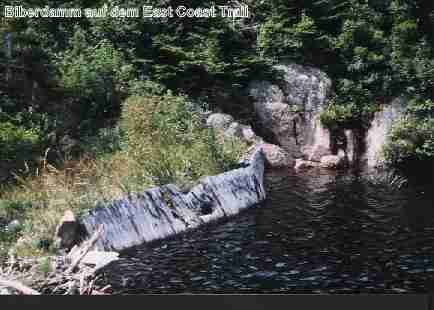 We erected our tent near the dam. In the middle of the lake, there was an enormous beavers' lodge. We waited the whole evening for the family to go for a swim, but not a single member of the family appeared. After our evening meal, it started to become overcast and, by the time we went to bed, we could hardly see three metres from us. The next morning, the fog had vanished. The weather was still not very good but we decided to set off. First, we crossed the beavers' dam, then the track climbed steeply. After this, we crossed a plateau. Sometimes the route went down, sometimes upwards, and then down again steeply to Freshwater, the ruins of an old fishing village. 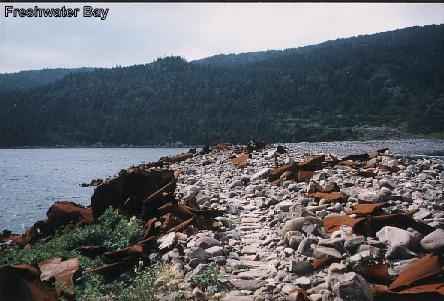 It continued across a bay, on a dam formed by enormous boulders, which had been washed there. On the dam was a lot of wreckage from ships, which the sea had cast up there. Here, there was a smoke-stack; there, part of a ship's propeller and, further back, large deck-plates. It is said that 180 wrecked ships are resting on the sea-bed between here and St. Johns. After crossing the dam, the track went upwards again, and into the forest. That night, we pitched our tent near a mountain stream. There was even a wooden bridge (the first on this trail) across the tiny stream. Further down, this little stream even feeds a waterfall. The next morning was hot. Already while we were eating breakfast, there were beads of perspiration on our faces - and that at the end of August, in a country which I thought was cold. We went across the wooden bridge and through the forest. When looking north, in the direction of Fort Amherst, one could often see the coast. The end of this part of the trail is Blackhead, a small fishing village. From there, we hitchhiked back to St. Johns. After resting, we started on a short tour of the harbour. We had read that fin-whales and dolphins are still seen there but, unfortunately, we didn't see any whales - or any icebergs. But we will go there again - not only because of the whales and the icebergs, and not only because of the marvellous scenery. We will go there again mainly because of the people - their friendliness and willingness to help, which enabled us to have a wonderful holiday in a wonderful land.

To the second Part of the East Coast Trail