The continuation - Through a military restricted area with escort

After everything had been packed and stowed in the boats, we set off to find the place for which Slava had given us the coordinates. It was on the other side of the river, but we couldn’t get nearer than 30m. We stopped on the nearest sandbank and waited. Three young Russians definitely wanted to start a conversation with us. Somehow, communication is always possible – even if only to a limited extent. When they heard that we were German, they told us that ‘Rammstein’ was their favourite rock band. I must admit that I had never even heard of this group

At about 18 hrs, a man appeared on the opposite bank and started to assemble a kayak. This was actually Slava, our guide for the remaining 320km of the river, to Ust-Kamchatsk, through a military restricted area.

From  the very  first  minute, our fears about our guide proved unfounded. Communication was no problem. Slava' s English is excellent - something we could not say about our Russian. 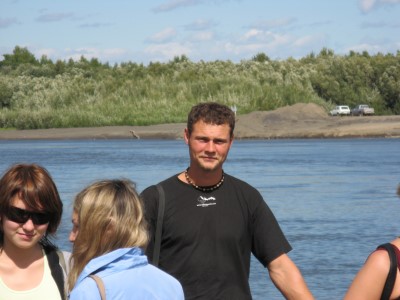 He asked us at once about how our boats had capsized – He had heard about it from Martha.

We spent the night on the sandbank opposite Kozyrevsk. The next morning, after we had had breakfast, and after everything had been stowed in the boats again – Slava took some of our canoe-sacks in his boat – we set off. 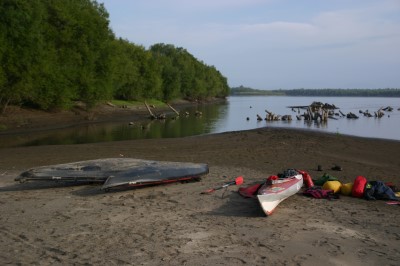 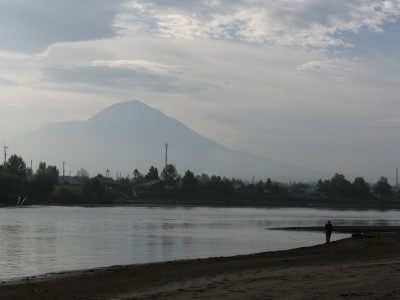 For the first time, we were on our way but not alone. However, after our experiences, we were not exactly sorry to have someone with us.

Here, the character of the river is very different to in the Milkovo area. The river has become wider and flows more slowly. So, after seven hours in the boats, we had travelled only about 40km. There were not only the tiny black mosquitos but also tiny white monsters, which did not sting but bit. Especially when it is getting dark, it is impossible without chemical protection and mosquito nets. 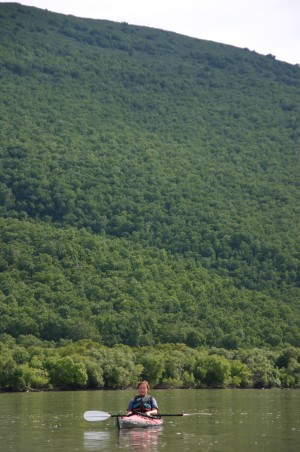 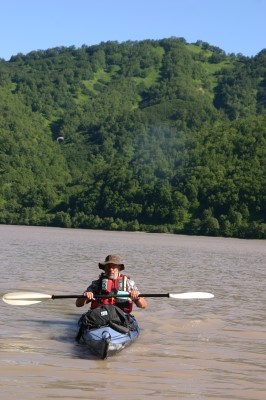 On our second day, we could already see the lower 4000m of Mount Kljutchevskoj (the upper part was hidden in mist). It was a fantastic view, which accompanied us the whole day. In the course of the day, the landscape changed several times and, at the end of the day, there was a real stretch across a lake for the kayaks. The river is so wide that the wind can raise real waves – it is a question of whether the wind is blowing with or against the river current.

On the edge of the sandbank on which we pitched our tents, we found the old tracks of bears. Slava told us that the tracks must have been made by a bear which was about 2.50m in size. 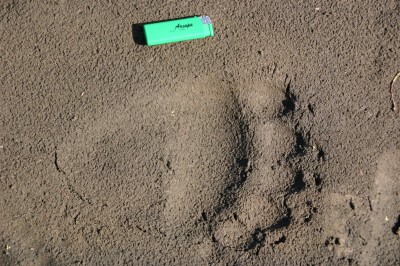 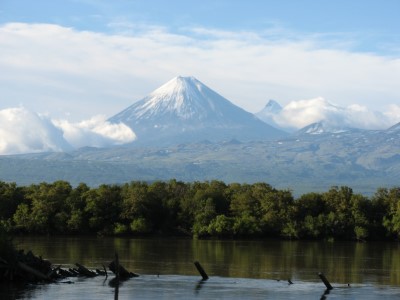 We observed all the precautionary measures to be taken when near bears, and the bears did not disturb our night rest. The view, when we crawled out of the tent the next morning, was fantastic. A brilliant blue sky and, in front of it, Mount Kljutchevskoj, in its full size and beauty – 4688M.

That day, we needed three more hours to reach Kljutchi. Some of the houses there are really pretty. They are brightly-painted, with a well cared for front garden, nasturtiums in the boxes on the balconies, and hops on the balcony. In the fourth shop, we were even able to buy Muesli and nuts. Slava said that the inhabitants of Kljutchi were either members of the military, volcanologists, or fish poachers. Since the government started to pay its employees only sporadically – or not at all, the latter must be in the majority. But one has to have something to live from. 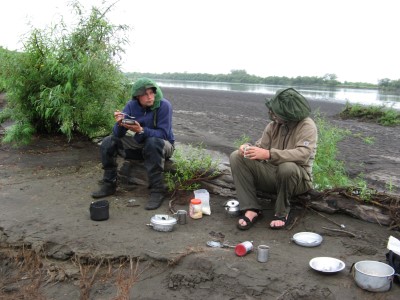 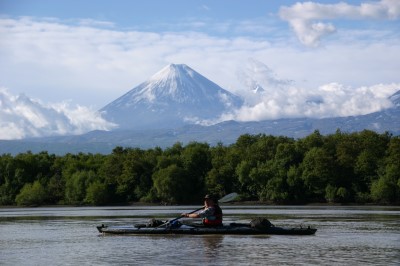 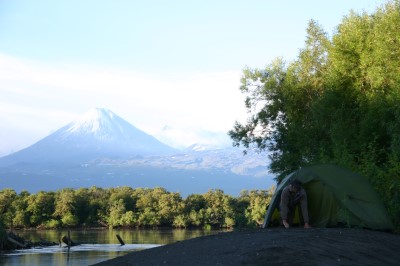 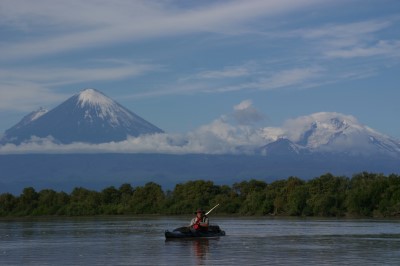 Just after Kljutchi, the wind freshened considerably, but this time it was from behind us. Although this meant that we were faster, it still took a lot of effort to remain on course as the current and the waves were superimposed. We came to a section where the Kamchatka was at least 800m wide – an enormous river. Again, we pitched our tents on a sandbank, stowed our gear, and I cook the evening meal.

The day had started with a relatively strong current but then we came to places where the river was very wide, and there was hardly any current. This was the section we had been warned about in Milkovo. Michail had told us that it was impossible to cross this section in a kayak. He also talked about white-water in this connection. But there was not a sign of white-water. It was a fantastic sight, with mountains on either side – and we glided through, silently, in our kayaks. Slava knew a fisher and hunter here, with whom we stayed for the night. On our arrival, we were first greeted so exuberantly by three dogs that Annette’s boat almost capsized as she was getting out. Vasilii let us use one of his huts. He told us that, in this section, the Kamchatka carried as much water as the Amazon. While we were talking, Slava was preparing fresh salmon for our evening meal. It was a delicious meal and we ate until our stomachs were full of salmon. During the night, the dogs made a hellish noise. The next morning, we found there were bears not far away. They also wanted some of the salmon. 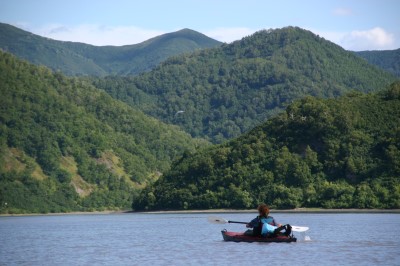 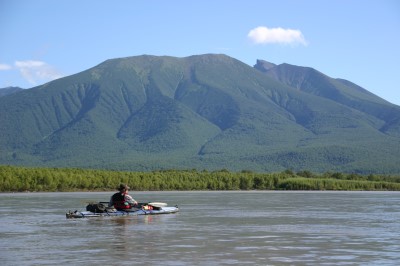 Bats were hanging in the beams of Vasilii’s hut and there were three soft, fluffy cats. Annette would have liked to take one with us. She said that, without passports but with a cute kitty, we wouldn’t have any problems getting out of Russia or back into Germany. But we left the cats there. I don’t think we could have persuaded them to come with us, especially as Annette could not decide between the white and the mouse-grey cat.

An old wooden church, built in 1703, was where we were aiming for the next day. In the meantime, we had left the mountains behind us. The last stretch to the pier was upriver on a tributary of the Kamchatka. To finish the day off, we had to work really hard again here. After we had pulled the boats up out of the water, Slava went to look for the priest who looked after the old church and lived here. While he was doing this, we unloaded the boats. In the meantime, a motorboat came, bringing the priest in it. Unfortunately, Slava was not there, so we had to rely on our knowledge of Russian. That would not have been so bad but the pope (Russian priest) thought he could speak English. Unfortunately, this was far more difficult to understand than Russian. When Slava returned, the pope complained to him that we didn’t understand his English. 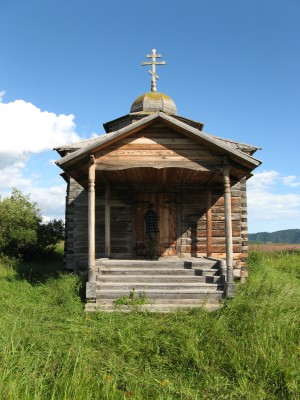 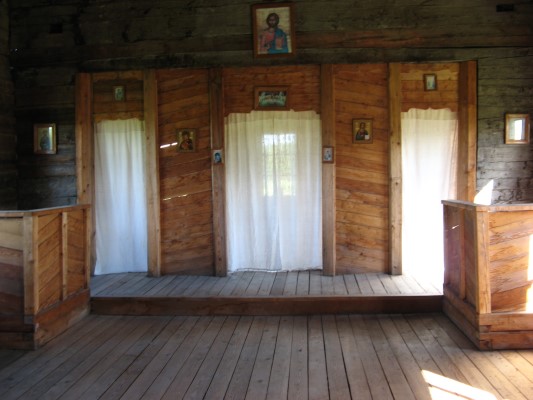 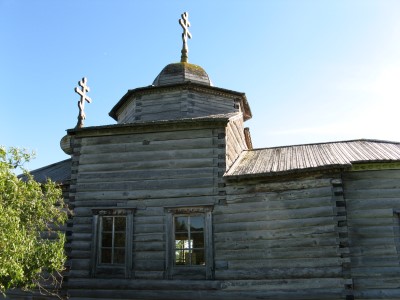 The over 300 year old church is very simple but it is beautiful, with lots of light inside.

Unfortunately, when we wanted to leave the next morning, Slava had forgotten his cigarettes and had to turn back. As the Kamchatka is very wide and sluggish here, waiting for him was no problem.

Slava had promised that there would be fewer mosquitos that day. He was very wrong!! But that was the only mistake that he made. We pitched our tents in a meadow, just before we reached Ust-Kamchatsk. According to Slava, it was only two kilometres from here to the sea, so we were very near our goal. At midday, I wanted to avoid a sandbank on one side of the river but, unfortunately, I got stuck on a sandbank in the middle of the river. I had to get out, pull the boat into deeper water, and then get back in. Luckily, there was very little current. 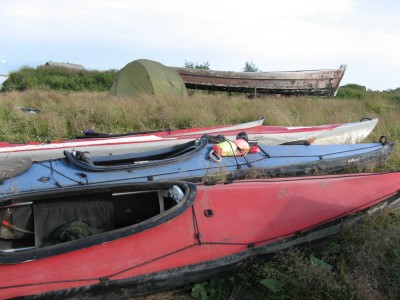 During the last few kilometres of our stretch for the day, we saw a few seals. We were amused by the way in which they looked at us with their big round eyes and then suddenly dived underwater.

The last stage of our trip was rather exciting. In the morning, we couldn’t see a hand in front of our eyes. In spite of this, we set off. At times, we could only determine Slava’s position by calling. As we went too far to the east in the fog, we finally had to carry the heavy boats over a sandbank and, by about midday, we were finally about where we wanted to be. We now had to take the boats apart and pack them quickly. Luckily, our transport was a bit late, so everything was packed when Slava’s friend arrived with his van.

On arrival at the hotel, our missing passports again caught up with us. Slava had to make another report for the police officer who arrived shortly after us. After reports for both Annette’s passport and mine had been drawn up and signed, that was the end of the matter for the time being. On our way across the restricted area, we had not been controlled once. In view of the detailed report which had to be made in the hotel, that was definitely just as well. Unfortunately, we had to give our FSB permit for the restricted area back to Dilgans  before we left.

Slava managed to get tickets for the bus back to Petropavlovsk for the next day. Without him, we wouldn’t have able to get them. That evening, we celebrated that we had reached our goal within the available time. 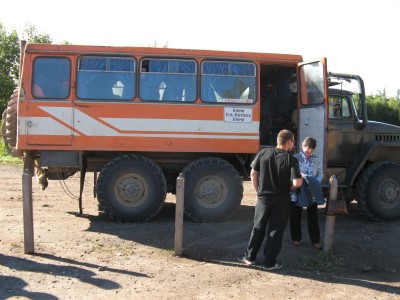 The day began rather hectically, because we had miscalculated how long we would need to get all of our gear to the bus. Without Slava’s talent for organization, we would have had a problem. But we managed to get there just on time. From Ust-Kamchatsk to Jelizovo was a 15 hour journey. Most of our luggage was in the aisle, so passengers had to climb over it at every stop. We arrived in Jelizovo at about eleven in the evening. Luckily, Martha picked us up in her van at the bus station. Thus we had managed to complete the second part of our trip on the Kamchatsk, from Kozyrevsk to Ust-Kamchatsk, successfully – with help and support from Slava. He was just the guide we had wanted and hoped for.