Nalycevo - A Paradise for Hikers, but not a Bear in Sight

After our adventure with the kayaks, we wanted to feel firm ground under our feet for a while. Actually, our dream was to walk into the Valley of the Geysers – but our enquiries showed that this is no longer possible, because of new environmental regulations. The only possible alternative to fly there by helicopter, walk in the park for a couple of days – with a ranger and park inspector accompanying us – and then fly out again. Contrary to our usual practice, we calculated the effect on our budget (over two thousand dollars was too much for us). With heavy hearts, we decided against the Valley of the Geysers. Martha (our contact person in Jelizovo) made every effort to find alternatives. We could have accompanied a married couple doing research to the absolutely deserted southeast of Kamchatka, where they wanted to observe dall sheep. After a lot of thought, we decided go hiking in Nalycevo. We obtained a permit and maps from the National Park Office in Jelizovo. Slawa, the guide from our kayak tour, had rhapsodized about bears which passed at a distance of only ten metres, while one was lying in a hot pool.

The park is so near to Jelisovo that one can drive to the edge of the park by taxi. However, the village at the entrance to the park is so small that it is best to make arrangements about being picked up afterwards before starting out – there is no public telephone in Pinacevo. We arrange, with Martha, when we want to be picked up, and off we go. 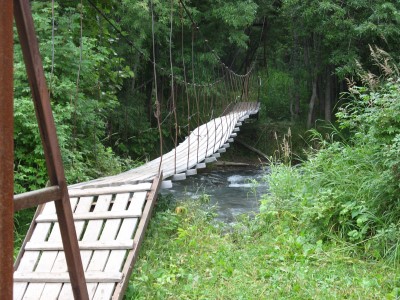 The taxi driver had set us down in a large open area, near the river. Directly in front of us was a suspension bridge across a foaming river. We were puzzled by the absence of track markings and, after a time, a man came towards us on a bike. He told us that this was not the right track, so we went back. A few metres to the side of the suspension bridge, we found the right marking – a blue panda. 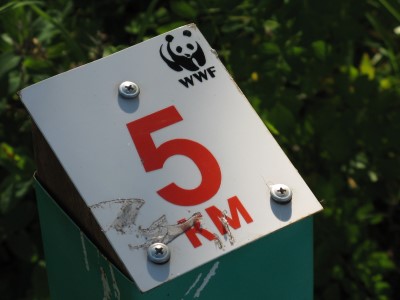 Every five kilometres, one finds a metal plate, giving the distance to the park border. The first day, we walked 23 km up and down, crossing streams (with tree trunks as a bridge), and across marshy ground. I could often hear the voice of the park ranger: ‘If the grass is over two metres high, a bear can’t see you’ (but we also could not see it). At last, the hut where we were to spend the night came into sight and we were happy to have the first stage behind us. First, we reported to the ranger, and then we set up our tent. During the night, a large animal came near our tent, but it was chased away by the ranger’s dog. We didn’t want to look to see if it was a bear. 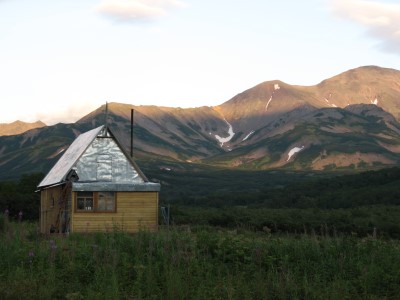 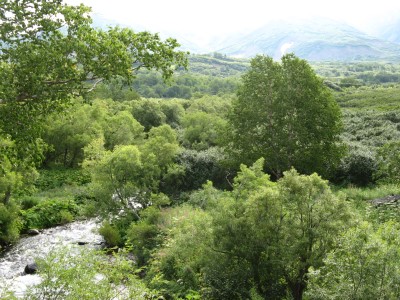 The second day also began rather strenuously. Right from the start, we were going uphill. By the time we reached the first hut, I was already exhausted, and we still had another twenty kilometres to go. Further up the valley, the way was about as bad as possible – badly marked, high grass, tracks that had slipped into the river. After we had been walking uphill for four hours, we couldn’t see any more track markings. We were in a snow field and couldn’t see which way we should go. After several attempts to find the track, we gave up and went back to the last hut. Some time after our evening meal, a Russian hiker came from the opposite direction. On his digital camera, he showed us photos from the snow field where we had given up. We had been on the right track! 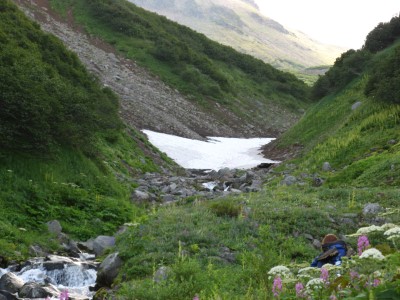 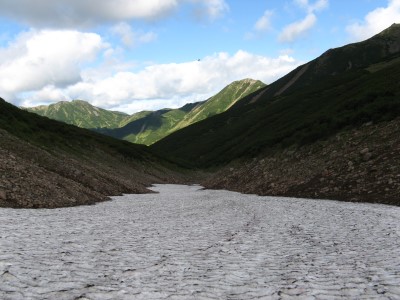 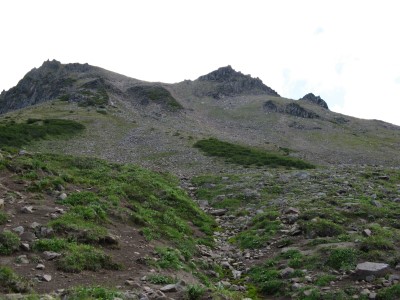 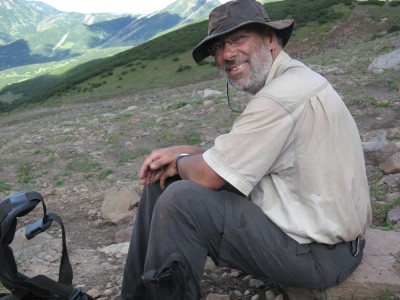 On the other side, we could go downhill very quickly, and we had a job hiding a grin when we met two groups of hikers who already looked pretty tired. The track continued by the side of a river and then again through high grass. Reinhold felt: Thank goodness there aren’t any brown bears here – one would fall over them. 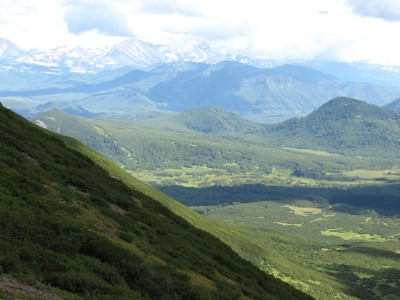 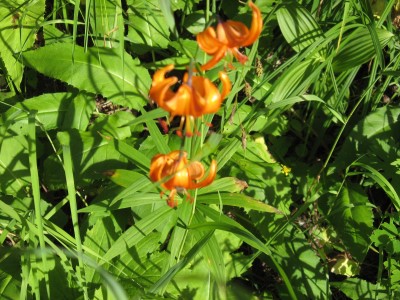 The last two kilometres of the track before the Nalycevo central hut were through relatively open birch forests. When we arrived at the hut, it was not so easy to find the ranger. Unfortunately, he could only speak Russian but, in spite of this, we were able to rent a comfortable hut. 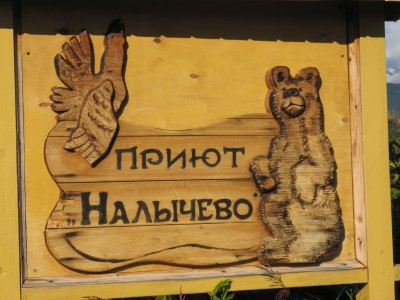 Another hiker, who we had already met while on our way, showed us round the place. The next day, we decided to rest. We looked at the hot springs, where almost boiling water came out of the ground. It then runs through a long channel at the end of which one is allowed to wash dishes. About midday, we bathed in a hot pool. The hot water was good for our poor muscles. However, there was no sign of the bear! That evening, while cooking, we again met the hiker from the previous day. With his little daughter, he had been to the mineral springs at the foot of the volcano and had brought us very pleasant-tasting mineral water. I was surprised – in Iceland, the water always tastes like (rotten) eggs, and here it was really good. Our farewells from the park ranger the next morning were very hearty. He gave us another map of the park (with the park stamp, of course). 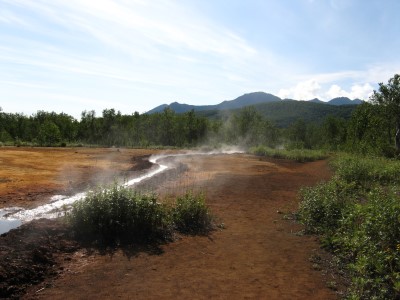 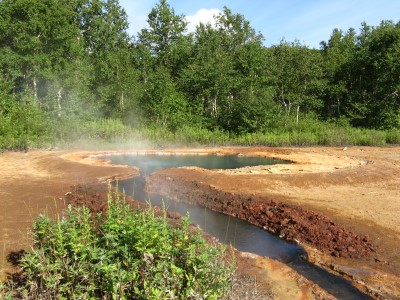 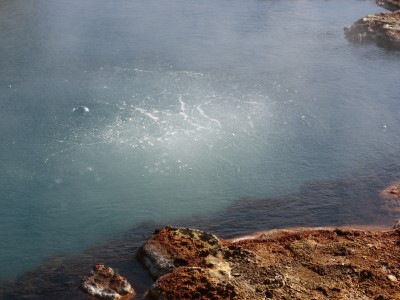 The way back was just as strenuous as the way into the park, but I was very proud that we managed the climb to the pass quite easily and relatively quickly. However, it was rather foggy the whole day, and we couldn’t see the top of the pass until we were only a few metres from it. On the way back down the valley, we startled an animal – but it vanished so fast that we couldn’t what kind of an animal it was. 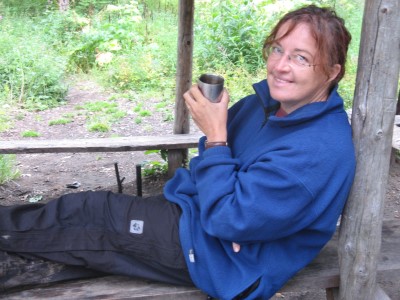 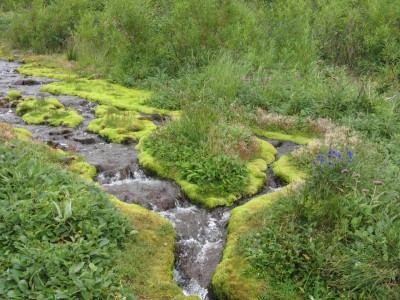 We spent the night in an old hut by the track. The next morning started with the sound of raindrops on the roof of the hut. It definitely looked like autumn now. The trees were changing colour and the morning mist lingered over the river for a long time. When the rain eased up, we got on our way. Our first stop was made near the huts where we had spent our first night. Only a few metres from where we had set up our tent only a week ago, a bear had ravaged the area. A ‘Leki’ pole had been bent, sugar scattered, and there was an enormous ‘bear’s heap’ in the grass – but there was no sign of the culprit.

Our way led towards the park exit, but we were a day early for the person who was to pick us up. So we decided to spend another night in the park. I didn’t feel too happy about this, although the place where we erected our tents was beautifully situated under trees, near the river. After breakfast the next morning, the last eight kilometres were like going for a walk. We were still at the arranged meeting place much too early, so we sat down by the river and waited. 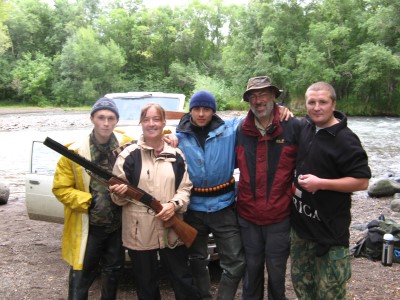 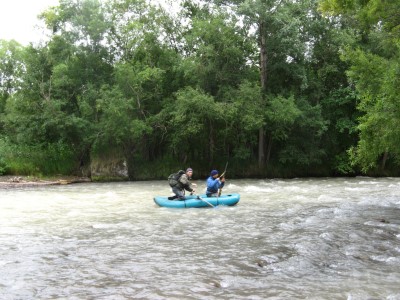 A little later, a car with a boat passed us, looking for a suitable place to put the boat in the water. Ten minutes later, the car came back and three young men started to unload the rubber boat. A few minutes later, one of the three asked if we would take a photo of them. After the photo session, they invited us to a picnic. Roast chicken, fruit, omelettes, bread, gherkins, cooked meats, cheese, apricot juice and, of course, vodka. One round of vodka was followed by the next and, after some time, we were joined by a lad from the village. He, too, was given a friendly invitation. In a mixture of English and Russian, they told us that they were law students, hunting ducks. When the second bottle of vodka was empty, the lad was sent to the village to fetch reinforcements. In the meantime, the old man who had put us on the right road on our first day appeared, in order to control the young men’s permits very carefully. Luckily, he didn’t want to see our ‘drowned’ passports and visas. After three bottles of vodka (the driver didn’t drink even a drop), the two young men set off in their boot. Soon they were in the current and, in a few moments, they were already out of sight – we would have liked to know how far they got that day! We really enjoyed the open and friendly mentality of the young men.

Half an hour later, we were picked up by Martha, and it was quite a job not to let her see how much vodka we had drunk. 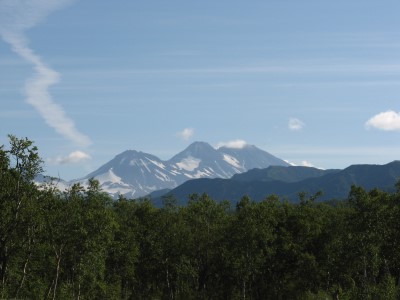 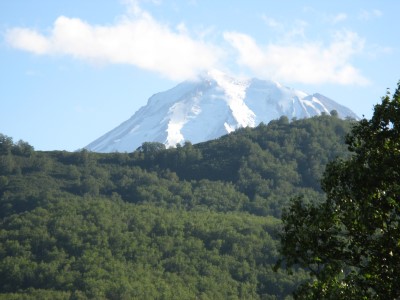