For those who don't know Norwegian: ' I, myself, have never paddled a canoe in that area, but I think it should be a good place for canoeing. Keep your eyes open, because you may meet seals, as well as a small kind of whale, known as the 'nise' . But these shouldn't be a problem.' This is what a Norwegian friend said when we told him of our holiday plans.

The journey from Southern Germany to Norway seemed endless. But the buffet on the ferry made us forget the hard drive. Our first day on Norwegian 'territory' started with the ceremonial hoisting of the flag on the sun-deck. It was the 17th of May, Norway's national holiday. On arrival in Bergen, we found that nobody was at home. 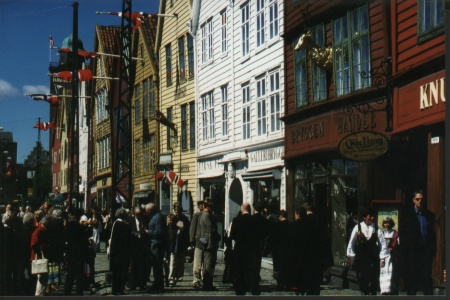 All the people of Bergen had gone into the town, to watch the Flag Parade. It is no exaggeration to say that, on the national holiday, all Norwegians wear national costume, and at least five flags are hanging in every garden. The big fireworks display started at 23 hours. 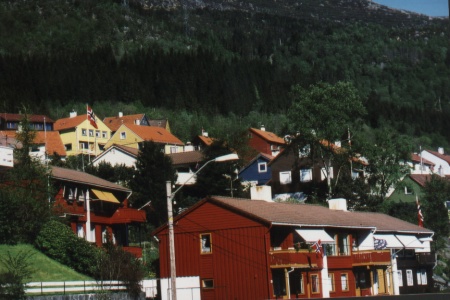 It was still not really dark but to have the fireworks on 18th May would be pointless. From Bergen, we went north to Sognefjord. There were waterfalls everywhere, as the spring sun was melting the remaining snow. 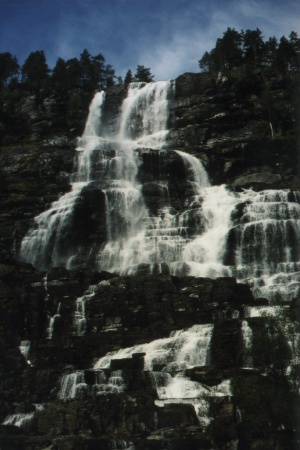 We had planned to start off in Gudvangen. However, by the time we had finally got the boats assembled and were ready to paddle off, the head-wind was so strong and gusty that it was absolutely impossible to go on the water in a kayak. After waiting on the shore for two hours, we decided to spend the day doing something else. We visited the Stave Church in Undredal. It is the smallest church in Norway, with room for only 20 people. It is very beautiful - inside the church, the roof is painted like the night-sky but with the sun and angels flying around it. 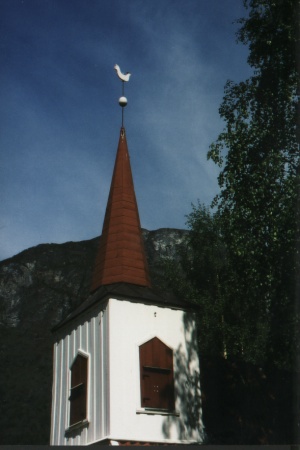 Through the windows of the church, one can see orchards with the fruit trees in full bloom. If we do finally decide to get married some day, I think this would be a wonderful place. For the next couple of days, the foehn wind remained just as strong and paddling would have been impossible. After waiting for three days, there was glorious weather at last, with only a thin veil of mist occasionally. Off we paddled. Near Styvi, we shared a meadow with three sheep for a night. 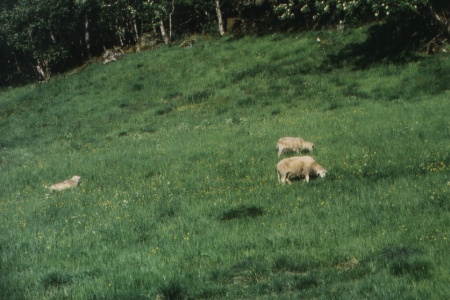 They were peculiar sheep - the entire time we were there, we didn't hear a single 'baa' from them! In spite of rain during the night, the weather was reasonable the next morning. At first, paddling went well but, when we turned from Naeroy fjord into Auerland fjord, we were confronted with a head-wind and high waves. There was no place in sight where we could have landed - almost vertical cliffs rose straight out of the water. Luckily, we were able to reach the only flatter place, which we had already found on the map. Just before the place where we stopped for the night, we saw a herd of mountain goats. They were small and cute - most of them were white. As we approached them, the whole herd jumped up. A little black goat must have been laying on another goat - it suddenly found itself with its front legs sticking up in the air. The next morning, we were back on the fjord. As soon as we had turned the next bend - a head-wind and waves. 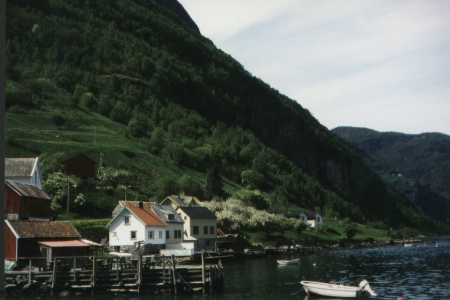 We made a short stop in Undredal, where we met two Norwegian canoeists. They told us about seals and otters in the fjord. As we paddled on, the sun came out and the fjord was as smooth as a mirror. That afternoon, Reinhold saw an otter and, for a long time, he could be heard going into raptures about the beautiful animal. In the evening, we arrived in Flam. At last we were able to wash the salt water off our skin again. On the return journey, we had wonderful weather and smooth water. 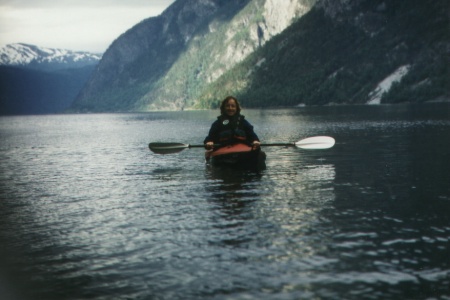 In spite of this, we decided to paddle as far as Naeroy fjord and to spend the night with our silent sheep. Who knows how long the weather will hold? On the last stage in the direction of Gudvangen, I saw one of the legendary seals (a fair compensation for Reinhold's otter). The last part was again rather windy and thus heavy going . 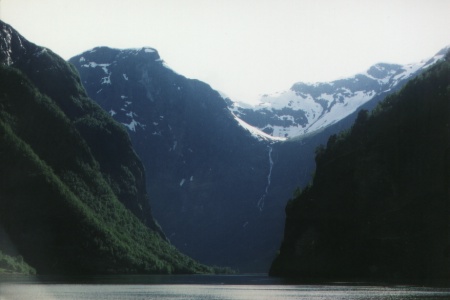 On arrival in Gudvangen, the first thing we did was to reward ourselves with coffee and baguettes with shrimps. Then we visited the Norwegian 'book town' Fjaerland. It has 500 inhabitants and about 15 second-hand bookshops. Of course, we found what we were looking for. While making the return journey on the ferry, from Mannheller to Fodnes, we saw two bottle-nosed whales. They really do exist!