How it all began

Shortly before our summer holiday in 2005, while looking at the web site of our favourite equipment suppliers – in the Internet, I found the advertisement for the competition ‘Make your dream come true. Where is your dream destination for a holiday, and what would you do there?’

That evening, we sat down together, and we each made a list of our favourite places. After a long discussion, we finally decided the No. 1 – the Russian peninsula of Kamchatka, in the Far East. Our aim was to go up the longest river in the peninsula in a collapsible canoe. We didn’t know much about the river, nor about the Kamchatka peninsula – except that there are a lot of volcanos there – but we would be able to get hold of the necessary information. We completed the application forms and, the next morning – our last work day before the holiday, I posted them.

On our return from Vancouver and Vancouver Island, I again looked at the forum on the web site of the above-mentioned outfitters. Voting was taking place on those suggestions for ‘Make your dream come true’ which had been selected in the preliminary round. There were different categories – with three suggestions in each category. I couldn’t believe my eyes – with our suggestion, we were one of the three selected in the category ‘group travel’. When voting ended, we had 1000€ in our travel kitty, and the ‘obligation’ to now really make our dream come true. 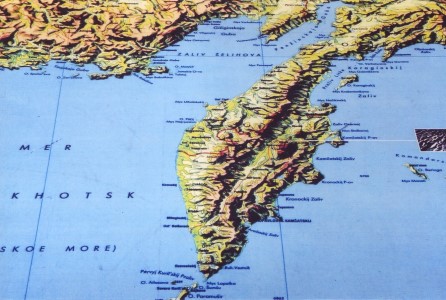 Preparations were rather difficult. The number of travel guides with real information on Kamchatka is limited – there is one (1) reasonable travel guide. On the one hand, that was good but, on the other hand, we would have liked to have written just this travel guide, after our trip. Internet links, plus the concrete reports and experiences of individual travellers were a great help.

The first e-mails quickly revealed a basic problem. The people who we approached could simply not imagine individual travel in Kamchatka. Here are some typical extracts from these e-mails. As we don’t want to make anyone feel a fool, we will not mention any names. However, the e-mails show the basic problem with individual travel in Kamchatka, and we feel that this also applies throughout Russia.

This e-mail made me think. One person could not imagine independent travel. The other uses bureaucratic and other regulations as an argument, and worried about being held responsible. But we expressly wanted to be responsible for any risks that we ran.

This time, we did not want to book our flights via Internet – we looked for a travel agency which specialized in Russia. As we wanted to take our kayaks with us, the question of excess baggage and what this would cost was an important point in our calculations. We had often noticed a travel agency with Cyrillic lettering on the outskirts of Bad Canstatt. When booking the flights there, we were told that the dates were impossible. When asked if all flights on these days were fully booked, we were told that a tourist visa was valid for only 30 days, and our travel dates exceeded this period. When we asked about a business visa, valid for three months, we were told that this was impossible.

We decided to book the flights first and then get the visas ourselves.

We now had three parallel components:  obtaining our business visas, organizing our kayak trip on the Kamchatka River, and an individual tour in the Valley of the Geysers.

The question of visas was solved quickly and expertly with the help of mein-visum.de. By the end of April, we had our passes back – complete with visa. At least, we now no longer relied on some kind of an invitation, which no-one wanted to give us – either because they would then be responsible, or for some other reason.

It was a stroke of luck when I found the report by a group of anglers. Not because we wanted to go fishing, but because of an address in the article.

In addition to lists of the kinds of salmon, when they spawn, and the equipment for fly-fishing, we found the following passage:

For help in obtaining visas, licences and transport, we can thoroughly recommend the firm

of anglers, with Russian guides, if desired.

Our first e-mail contact with Mrs. Madsen raised our hopes that we might still be able to carry out our plans.

Thank you for your inquiry. I would be happy to help you with your documents and any other needed logistical questions. Besides an invitation and voucher for getting a visa, you need 2 special permits for entering Ust-Kamchatsk - one from Border Guards and one from FSB (police) as this is a special zone near the military areas. My partner company Diligans Kamchatka can do the documents for you. I will double check on the cost but I think its about $50 US per person. I need to check but you may be required to have a Russian guide with you in those areas. There is a new Kamchatka Kayakers' club that might be able to supply a Russian escort.

Also we have a bed and breakfast at our home and if you need a place to stay in town when you come through, we can help you. The cost is $35 per person.

Unfortunately we have learned that the Kronotsky Preserve no longer will allow any backpacking. However I enclose information on a trip to the Preserve for bear viewing.

That didn’t sound too bad. But: ‘a Russian escort’ – why do we need that? In the time that followed, this question proved not easy to solve. Based on our feelings and what we had done before, we wanted to be alone. We wanted to determine when we would start off in the morning, when we would take a break, when we would set up our tent in the evening and bring the day to an end.

However, in the meantime, we had also had e-mails saying that it was not possible to go on the river at all without a Russian guide.

With heavy hearts, we had to accept the necessity of a guide in the military restricted area between Kljutshi  and Ust-Kamchatsk. Martha’s partner agency Diligans procured the police (FSB) permit for the restricted area. We had to admit that we did not want to become closely acquainted with Russian prisons – especially as our knowledge of Russian was limited to an evening course.

We arranged with Slawa, the president of the Kamchatka Kayak Club, that he would accompany us on the stretch between Kozyrevsk and Ust-Kamchatsk. We wanted to do the stretch from Milkovo to Kozyrevsk alone. Here, Martha proved to be an indispensable helper and an understanding organizer, who was able to meet our wishes – at least partly.

At the beginning of July, after we had finally got our tickets for the flights, our visas, and the GPS coordinates for the meeting place with Slava, we could tackle our plans for the Kronotsky National Park and the Valley of the Geysers. We knew we needed an inspector to accompany us if we wanted to hike in the park without a group. We also knew that we would have to pay 2400 Rouble a day for the inspector. However, we wanted to fly to the park with a group, wander individually for several days, and then fly out again with another group, in order to keep the cost of the helicopter down to an amount that we could afford. The price we were offered was almost 3000 US$ (per person). This was far too much for our budget. So we agreed to delay making the final decision, as to what we wanted to do after our kayak tour, until we were on the spot. This had the advantage that we could discuss this with Martha directly and personally – and not just by e-mail. Gradually, the time for further preparations was getting short. The date for the flight there was 3 August 2006.

In the meantime, we had invested a large part of what we had won from Globetrotter in equipment and dried food. That lightened our budget considerably. 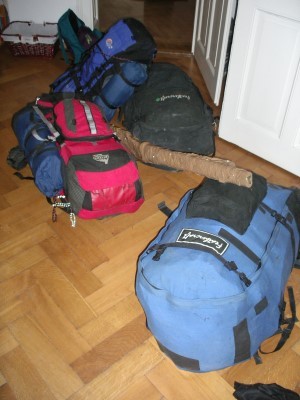 On 3 August, after a leisurely breakfast, we set off in the direction of Munich. Our flight didn’t leave until 23 hours. We had arranged to meet Annette’s sister and her friend at the airport. They were to take our car with them, to Munich.

Our first unpleasant surprise was when checking in our luggage. The travel agency had told us that excess baggage would cost 6.80 Euro per kg. At the airport, they demanded 10.50 Euro per kg from us – and that was only for as far as Moscow. But there was nothing we could do – we wanted to take everything with us.

On arrival in Moscow, we had to change terminals. International fights arrive at Terminal I and flights within Russia are from Terminal II. A bus ran between the terminals. However, the taxi-drivers wanted to get their slice of the cake. It wasn’t so easy to make it clear to them that we wanted to use the bus, and didn’t need a taxi. We had a twelve hour wait for our  connecting flight. Unfortunately, that was too short to make a trip into town with so much luggage. After we had got all our things into the bus and let ourselves be packed into the bus – like sardines in a tin, off we went – at breakneck speed – on a 30 minute drive to the inland terminal at Sheremetjevo airport. On arrival there, we discovered that – in contrast to other airports – there were no trolleys. To increase security, baggage was inspected at the entrance to the airport. Without trolleys, that was a hassle. Luckily, with the exception of a few batteries, we had nothing that was really forbidden. After putting our luggage in a quiet corner, I went in search of coffee. It was now seven o’clock in the morning, and we hadn’t slept a wink that night. 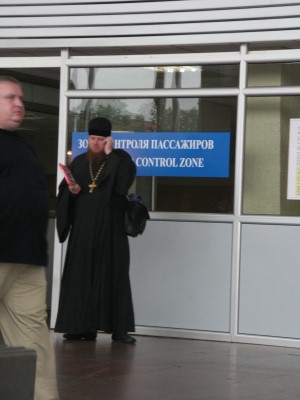 The attempt to get even a little sleep, sitting in a corner with our heads on the rucksacks, was not a great success. Soon we got books out, in order to fill in time usefully. Another possibility was to watch what was happening at the airport. There were several places where one could have one’s luggage packed in plastic foil. Although I couldn’t see the point of this, it certainly used an enormous amount of plastic foil.

To the second part of our Kamtchatka trip