An Elk, Seals and a Mink - Impressions from the Gros Morne National Park

The journey from St. Johns to Rocky harbour takes almost a whole day, if one travels by overland bus. It was early evening when we reached the Gros Morne. When the boats, the paddles, and our rucksacks had been taken off the bus, and the bus had driven away, Reinhold went to look for the information office. Fifteen minutes later, he came back with a couple of 'locals'. The information centre was about 10 km from Rocky Harbour but the 'Newfies' (Newfoundlanders) fetched their car and drove us - with all our gear - to the camping ground on the edge of the town.

Opposite the camping ground, on the other side of the road, is the 'Crossroads', one of the few pubs in Rocky Harbour. It consists of a shop (50% of the drinks on sale are light beers), a restaurant which is not exactly attractive, and the bar. The bar is the meeting place for the local women. In the evening, after seven, the shop fills and people meet by the one-armed bandits to drink lemonade.

The next morning, we went to the Visitor Centre to register our stay in the National Park. While there, we took the test which is necessary in order to get permission to hike the Long Range Mountain Track. We were very nervous, but Reinhold succeeded in finding the right way, using a map and compass.

The Visitor Centre also has a list of animals seen in the Gros Morne National Park. Everybody enters the animals which he or she observed in it - regardless of whether it is a black bear, an elk, lynx, or mink.

A hike to the Bakers Brook Falls served as a test for hiking in the Gros Morne National Park. Every time I heard a crackling sound in the bushes, I expected to see a family of black bears - but not a single Bruin let himself be seen that day. 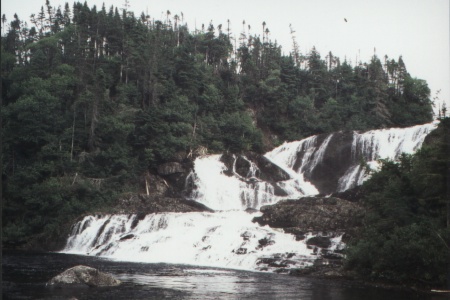 On a rainy Sunday, we went to Norris Point (with the help of a friendly driver, who took us part of the way), to look for suitable places to use our canoes. While doing this, we discovered Terry's Bed and Breakfast, which is right on the beach. 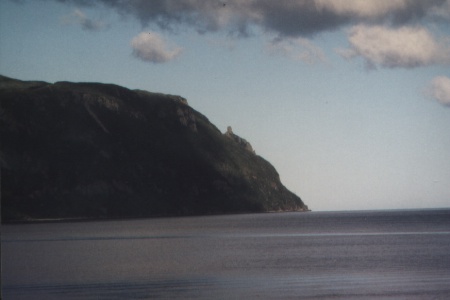 From Norris Point, we made a several-day canoe trip along the fjord. It was our first experience of ebb and flood tides. We spent a few nights in the remains of a deserted village. One morning, when we were waiting for the wind to drop (so we could paddle further), we were visited by a fisherman, who had lived there 50 years ago. In a language which we could hardly understand, he told us what the village had looked like then. We had to wait a whole day for the wind to drop. In the afternoon, we went to the back of the bay, where we watched a mink searching for food - the little creature moved so quickly that we couldn't even think of taking photos. Before paddling the canoes further, we wanted to fetch fresh water from the next waterfall. As we approached it, we saw two eaglets having their breakfast directly in front of the waterfall. A second look revealed the proud mother - or perhaps it was the father - in a nearby tree. We did not want to find out how far an eagle would tolerate us, so we fetched our water from another waterfall that day. 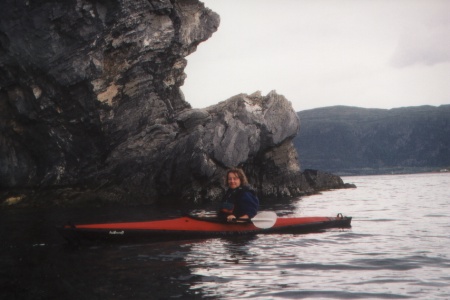 Back in Norris Point, Terry was already waiting for us. Our room was free again and we could rest.

Gradually, we found that the time before our return was getting shorter and shorter, so (unfortunately) we decided not to go on the long hike - at least not now. Instead, we saw the seals in St. Paul's Inlet and Western Brook Pond. Once again we had been hiking and were asked - for the hundredth time: 'Did you see any moose?' And, regretfully, we had to answer that not a single elk had put in an appearance during the three weeks. However, on the way to St. Paul's, an elk cow was grazing near the road. She let us come to within a few metres to take photos. 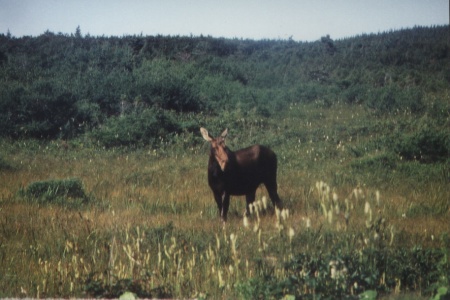 Our last visit was to Java Jack's Café. By now, we were well-known there and were greeted with, 'What did you do today?'

The book 'Shipping News' by Annie Proulx is set in the Rocky Point area. The main character always eats impossibly bad meals - and the food in the area seems not to have changed since then. Java Jack's Café was the only exception. A former park ranger opened a café here. She had paid great attention to details and the food was excellent.