From Tallin's "Long Leg" to the Lahemaa National Park

Although the weather in Germany was rainy, the air over the Baltic was crystal-clear and, from the plane, the hundreds and thousands of small lakes in Finland looked almost unbelievably beautiful. From Helsinki, the flight to Tallinn took barely half an hour.

When we arrived in Tallinn, we drove to the youth hostel - we were dead-tired. The foyer was occupied by very drunk Russian-speaking men and ladies of the oldest profession. In spite of this, our room was quiet and clean, and the next morning it was all over. 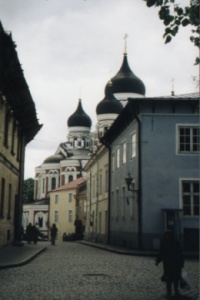 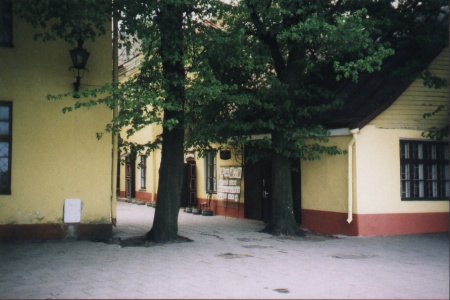 The Tourist Information Centre in Tallinn (located in the Town Hall Square) proved to be very efficient. So it was not difficult to reach the Lahemaa National Park - apart from the fact that the buses do not seem to keep to any kind of a timetable.

The first place we went to was the National Park Information Centre in Palmse Manor. The information available there was very scanty. However, it is well worthwhile to go for a longer walk through the grounds of the manor house. 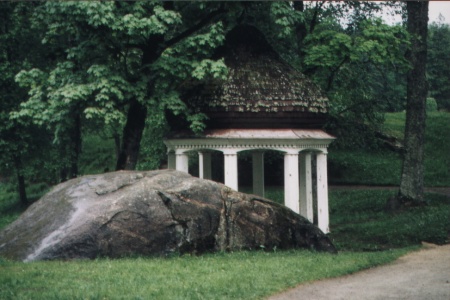 Repeatedly, there are interesting views to be discovered and, when we also saw a beaver, we were on top of the world. 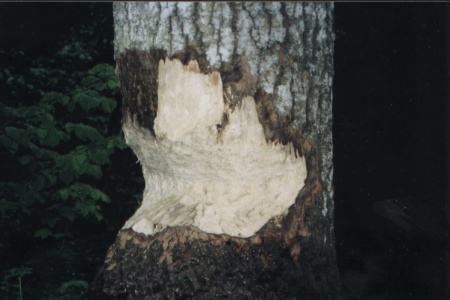 The next stop on our hike was the Sagadi Manor House. This, too, was a good example of how manor houses can be maintained in good condition.

From Sagadi, we walked in the direction of Oandu. Shortly before we arrived there, we disturbed a wild boar in the brush. I don't know who was startled more - the boar or us. Snorting wildly, it lumbered further into the undergrowth of the woods. We spent the next few days on a camping ground, run by the Forestry Commission, by a lake in the forest. From there, there are lovely, well laid-out hiking tracks. The Beaver Trail runs past many beaver dams and shows one the beavers' habitat in the river. On another track, one comes to the 'rubbing trees' against which the wild boars scratch their backs, or trees on which bears sharpen their claws. We are still convinced that we could hear the national park bears snoring in the thickets - but who would want to wake sleeping bears? 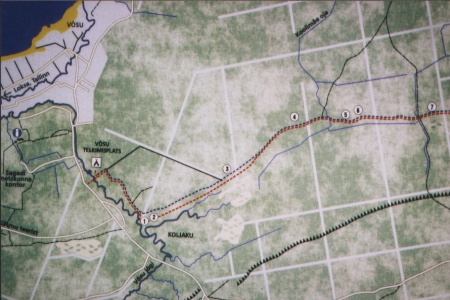 A really good tip on where to get information on hiking in the national park is the Forestry Commission in Vösu. A lot of the tracks are still being constructed (??) but it is possible to hike along them. The Forestry Commission also runs several camping grounds. In Vösu, there are several good places to stay overnight: a hostel, a holiday centre, private rooms (with even a genuine Estonian sauna) and places where one can buy things. However, there is not a single bank in the entire area. The next possibility of getting money is in Rakvere, 34 km from Vösu. One can get there by a bus, which runs through villages and takes just over an hour.

On the walk to Vösu, we discovered a kind of 'altar' with numerous mysterious figures - in the woods, between the track and the roots of trees. 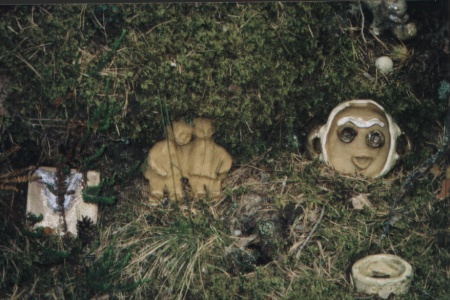 The bus back to Tallinn leaves very early - so early that, on the way to the bus stop, we saw a stork having its breakfast in a field.

We were back in Tallinn in time to experience the Old City Festival, in which the people of Tallin wear mediaeval clothes and relive the Hanseatic times for a weekend. The Town Council meets in the Market Square. Basket makers, people making pitchers, and smiths brought life to the streets of the old town, and a climbing competition for the court jesters took place on the town hall. 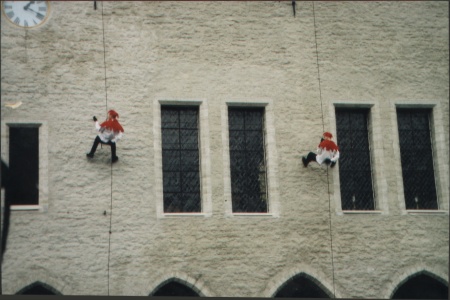 Estonia has a lot to offer. We are sure that we will go there again - and next time it will certainly be for more than 10 days.