Denali Nationalpark or My First Bear - from a Safe Distance

When we arrived in Denali from Anchorage, the first thing we had to do was to deal with all the paperwork. After this, there is the appropriate instruction on how the react if confronted with bears. This sounds rather dangerous but, as yet, only very few people have been eaten by bears. Then, during the drive to Wonderlake, we see our first bears. The bus almost tipped over, as everyone crowded on one side of it. 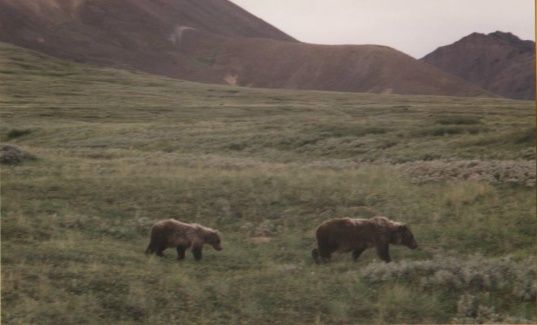 On arrival at Wonderlake, our first task was to pitch the tent and get our gear stowed in place.

The next morning, we started off on a short canoe trip on Wonderlake. That morning, even Mt. McKinley could be seen in all its glory. As we learned later, this was the first time that month. 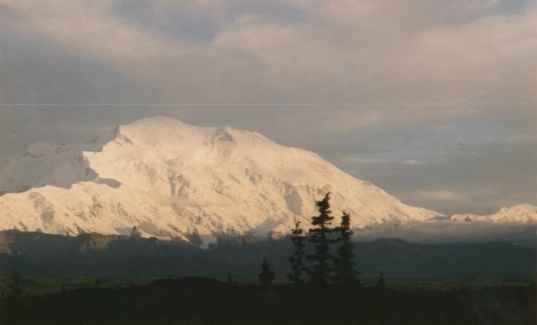 Denali in all its beauty

We have allowed only five days for the Denali National Park. So there is only enough time for a few shorter hikes in the more immediate vicinity.

Katmai-National Park - a Lot of Bears at Close Quarters

Having already had our first experience of bears, we now went on to the Katmai National Park. From King Salmon, this NP can only be reached by means of a sea-plane. Here, too, the first thing after arrival was instructions on how to react if one meets a bear. At the end of this instruction, each of us was given a sticker, which was to be worn at all times. If a ranger caught someone without a sticker, this person was sent for 'extra instruction'. 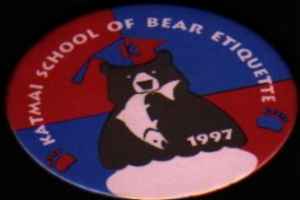 As we were carrying our gear to the camping ground, we suddenly saw a bear lying on the beach. It was having its midday nap and had no intention of letting itself be disturbed. On arrival at the camping ground, a ranger met us with the question 'Didn't you see the bear?' He then explained to us that we should have waited until the bear had finished its siesta. 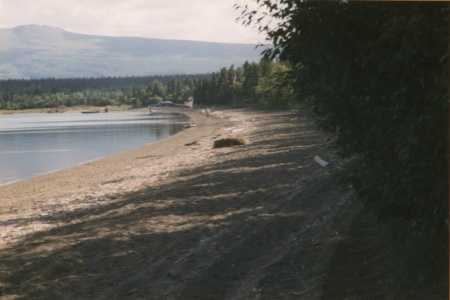 The first bear in Katmai, taking a midday nap

Two hours later, the bear was still laying in the same place. In the meantime, we had put our tent up and stowed everything away. Food and toiletries must be locked away safely, where bears cannot get at them. 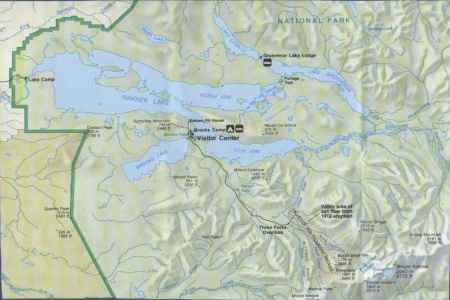 The next day, we start to put our boats together. Unfortunately, Annette's first attempt to put to sea soon finishes in the waters of Lake Naknek. After that, we decide to postpone our departure for a day.

The following day, we pack everything in waterproof canoe sacks and, when we see everything lying on the beach, we wonder how we will fit everything into the boats. But we do manage to stow everything properly - including two bear-proof containers in which we have packed all the food. After all, the bears should eat their fill of salmon and leave the dried food to us. The lake is very beautiful, and quiet. 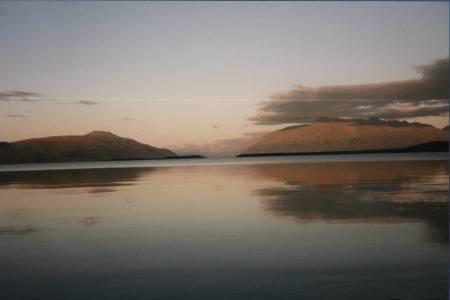 The evening of the first day, we find a small island, with no trees but with some grass, and a more-or-less flat area where we can pitch our tent. It is good enough for a night, and - in any case - we are pretty safe from bears here. Every place where we have stopped en route, we found the tracks of bears on the shore. 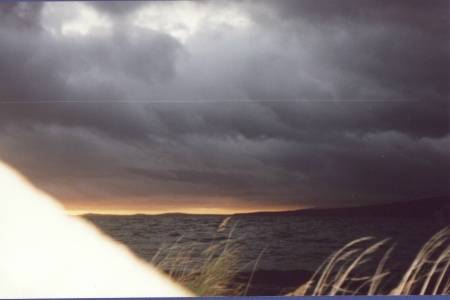 The weather changed radically during the night. It rained and was stormy. The waves on the lake made us decide not to leave the island that day. That day stretched to a total of three days. At last, we could carry on. The wind had dropped, but the waves were still quite high. 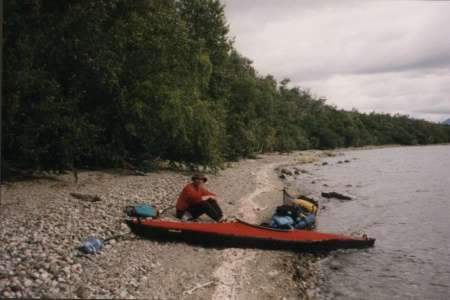 It was Annette's first longer trip with a kayak, so she considered my assurances that nothing could happen with a healthy mistrust. We reached the North Arm and looked for a larger island where we could spend the night. We wanted to reach the portage the next day. But the wind and waves made paddling tiring so, in the afternoon, we selected a pretty wooded island to spend the night. The next morning, when we looked at the map, we saw that we had to cross to the other shore of the lake and then go further east in order to reach the portage. That evening, it was almost dark, but there was still no sign of the portage. We decided to pitch our tent on the beach. When we emerged from our tent the next morning, we saw bear tracks leading right past our tent, down to the water. As far as the bears were concerned, we must have done everything right. When we were on the water again, Annette suddenly announced that our surroundings - especially the mountain - seemed rather familiar. I said they couldn't be - after all, we had been paddling west the whole time - my compass definitely showed me that. 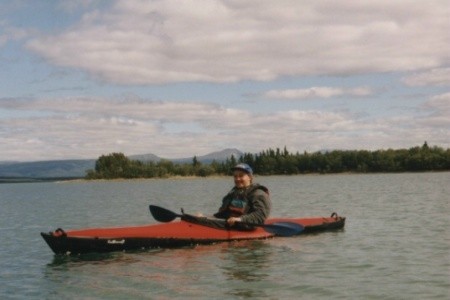 Annette answers OK, it is just after 13 hrs. In about half an hour, the seaplane will be coming from King Salmon to Brooks Camp. If I am right, it will fly right past here. We waited. Suddenly, we heard a noise. No, it wasn't a bear; it was the seaplane to Brooks Camp. After paddling on, we soon reached the promontory and the end of the North Arm. It is not enough to have a compass, one needs to know how to use it! Now that we once again knew exactly where we were, we decided to make a rather early stop, on a beach. The next morning, mist hung over the lake, which was smoother than it had been for a long time. In the afternoon, we reached Brooks Camp again. After pitching the tent, our first steps were in the direction of the showers. After that, we had a pleasant evening meal in Brooks Lodge.