The decision to legalize our 'sinful relationship' had been made some time ago. However, it was also clear that, under no circumstances, should this happen in a dismal German registrar's office. Then where should it take place? Because of the bureaucracy, it was not possible in our dream country Newfoundland. In Norway, we had looked in vain - for nine months - for a priest who would conduct the ceremony in the Undredal Stave Church. Then a colleague talked about getting married in Iceland. After our first attempt, it was clear that this might be possible.

As, some time ago, we had arranged to spend our summer vacation in Greenland, we decided to make a stopover in Iceland. On arrival in Iceland, we tried to reach 'our' priest - our second attempt was successful. It was Friday - and late morning. The priest told us to take our documents to the registry office as quickly as possible. We had called him from the shopping centre in Hafnafjördur and he said we should wait for him there. One just can't believe how many men who look like a priest you suddenly see if you are waiting for one and have no idea what he looks like. However, most of these men didn't even look at us but went straight past in the direction of the state-controlled outlet in order to buy their supply for the weekend. After we had waited for rather a long time, he finally came (and could be clearly recognized by his clothing). In the meantime, it was well into Friday afternoon and there was almost a weekend mood in the registry office. The person in charge checked our papers, found them in order, shook our hands, and said something in Icelandic which we couldn't understand. 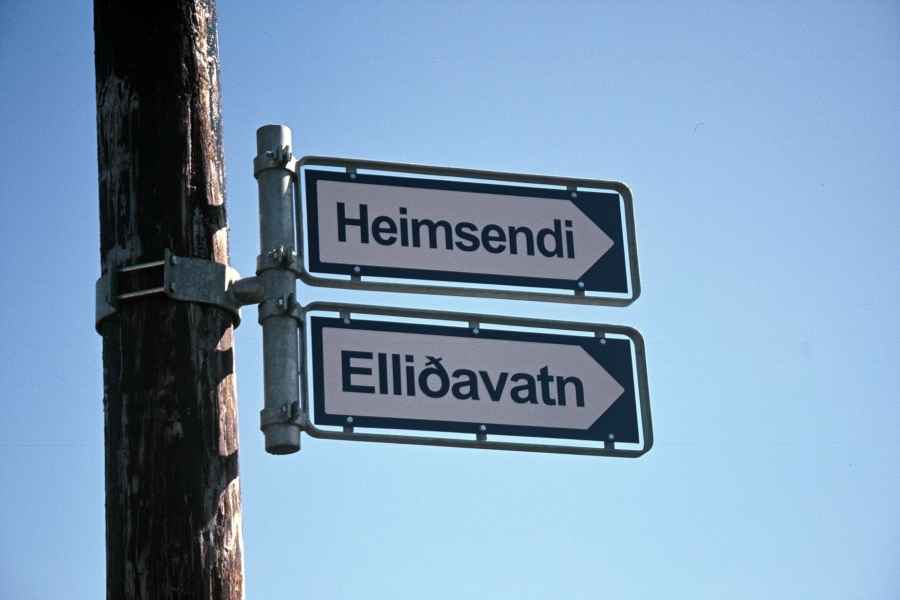 Our priest' then drove us to where we were to spend our second night, a chicken farm at the 'End of the World' - that was the address in Icelandic. Although he had lived in Iceland for twenty years and was a parish priest in Reykjavik, he had never heard of this address. The next morning - in order to pass time, we walked round the Edlidavatn (one should put in something to show whether this is a mountain, lake, or what). It was a pleasant four-hour walk, past an old 'Thing' place, pseudo-craters and parts of a new town section which was being built. In the afternoon, Father Rolland picked us up and took us to Our Lady's Church for the wedding. His French housekeeper and the English priest of the church were our witnesses. It was an unbelievably beautiful ceremony in the tiny church, and the international 'team' fitted us fine. Of course, one could have discussed part of his sermon extensively and for a long time ('the woman shall be submissive to her man' - and that in the 21st Century!!). After the Mass, we went together to the nearby park, to take wedding photos.

When we had done this, we went into the town - on foot. The way seemed endless and we were convinced that we had lost our way a couple of times. However, the drive back that evening by taxi confirmed that it really was that far. In spite of the high prices in Iceland, it is not easy to find seats in a restaurant in Reykjavik on a Saturday evening. After searching for a long time, we found a table in a steak-house, where we could end the day with a meal and red wine.

We spent the next day writing postcards to our friends, to tell them what we had done. In the evening, after I had taken a shower, my ring was suddenly no longer silver but copper-coloured. As the shower-water had smelt strongly of the boiled yoke of an egg, I immediately suspected the hens at the farm. But, of course, it was because of the high sulphur content of the water in Reykjavik - the hens were absolutely innocent.

The next thing that had to be done was to take care of the formalities. Once again, our priest picked us up and took us to the registry office, to have our marriage entered in the Icelandic Central Register there. After that, we went to the German Embassy, to get a confirmation for the German authorities. So now we are married - and that without German registrar!

Landmanalaugur - Rain and Storms without End 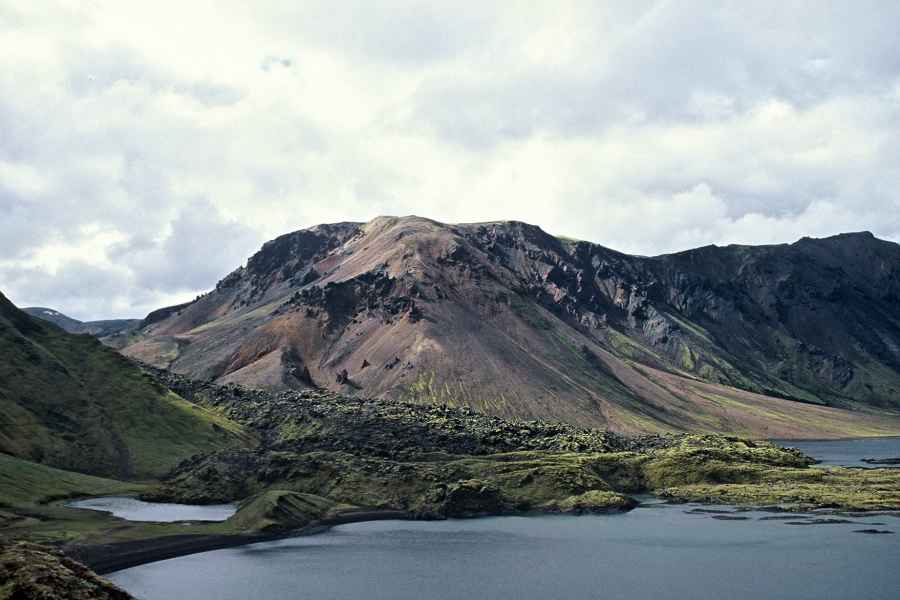 Our next destination was Landmanalaugur. The bus arrived there in the early afternoon. It was cold and windy. The large number of tents immediately put me off staying there overnight. Torn between the thought of bathing in the hot springs and the prospect of the first stage of the Laugavegur, we decided to carry straight on. The first sulphurous thermal area was very impressive. Everywhere, it was boiling and bubbling. Small hot streams gushed out of the earth and the mud glittered in iridescent colours. 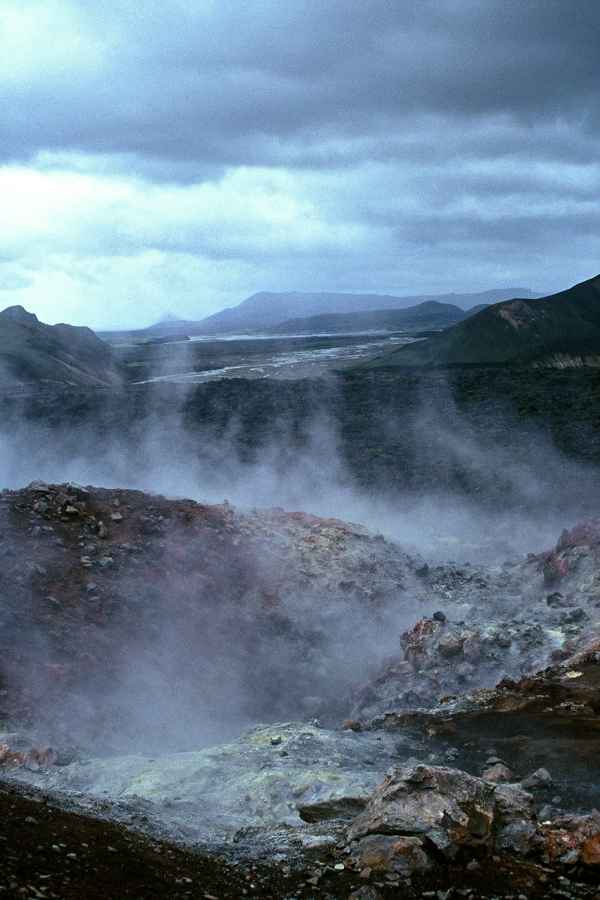 We spent the night in font of the hut, at almost 1200m. By the time we had set up our tent in face of a gathering storm, we were frozen through and through. It was hours before we were warm again. By far our worst experience during this tour of Iceland and Greenland was with the woman in charge of this hut. Because our guidebook said that one could cook in the hut, we had decided to save weight - and possible problems with the security personnel on our flight to Greenland - by not carrying a stove and fuel. And now we were told that the hut was full, and only those who stayed overnight in the hut could cook there. Frozen to the bones and tired out, we felt rather frustrated. Later, we were condescendingly given some hot water. 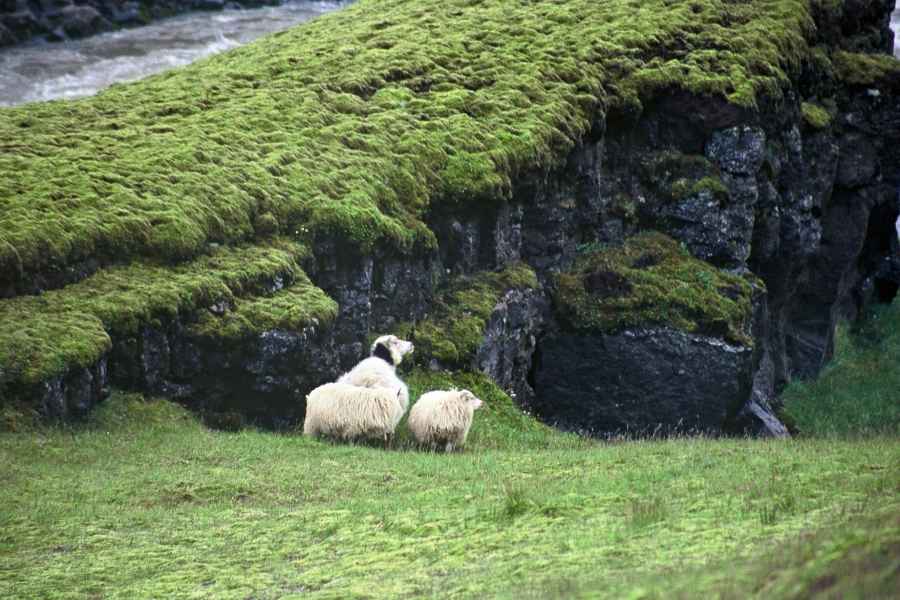 The next morning was cold and foggy but, in spite of this, we decided to set out on our way again. Reinhold had difficulty with the descent at the end of the second stage - my problem was wading through the glacial river just after the descent. In spite of this, we reached the hut at Altevatn - but that was also full. Here, too, only those staying in the hut were allowed to cook there. However, when we said that we had neither stove nor fuel, the custodian said 'Well, then you must cook in the hut' - so the problem was solved!! The following day, the Icelandic weather showed us everything possible - storms, hail showers, and rain. 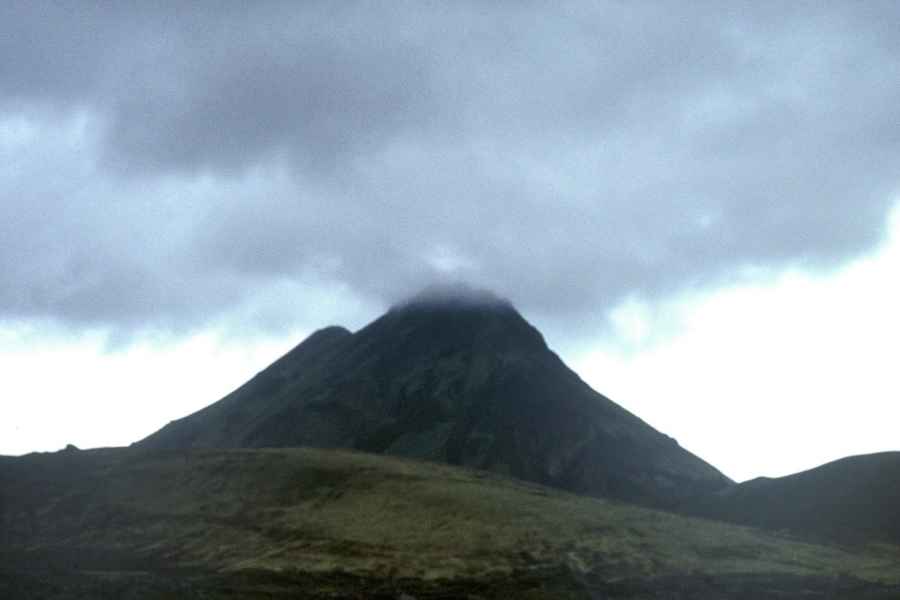 We couldn't even think of going any further. After another stormy night in the tent - in which we learned that we had done the right thing in spending more than planned on a tent, the support jeep of a French group of hikers took us on to the next hut. After all the inclement weather, it was wonderful to sit in the protection of a hut, to watch the rain and storm through the windows, and to cook a warm meal. In addition to this, most items of our equipment were slowly drying, so we could turn to the cultural aspect. 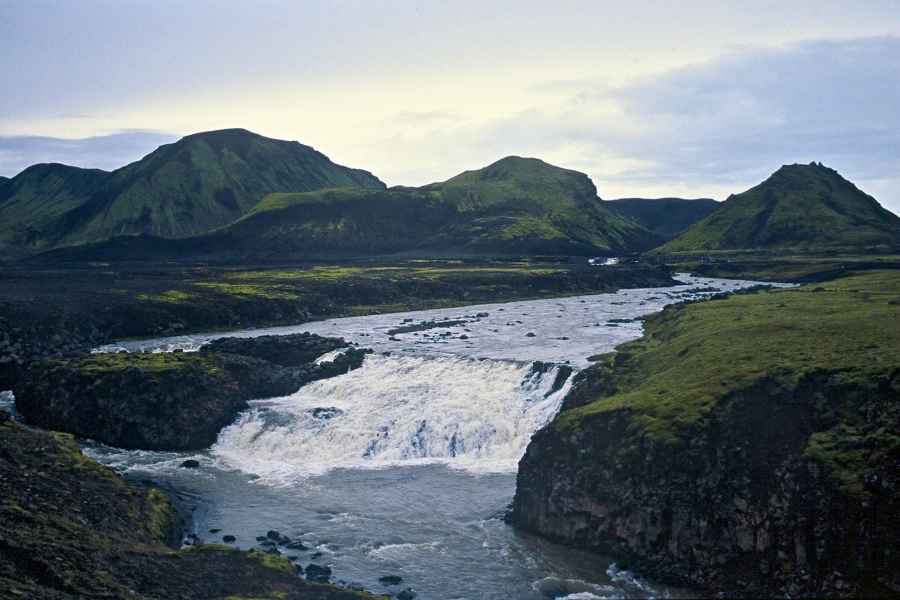 There were the French hikers, well-supplied with food, but it was a great effort for them to manage one or two words of English while cooking (the persons accompanying them were a real blessing). On the other hand, the Dutch were open and communicative…. What are the Italians cooking? Pasta - what else would they be cooking? The Germans - as we ourselves belong to this group, we can't this of suitable preconceived ideas. 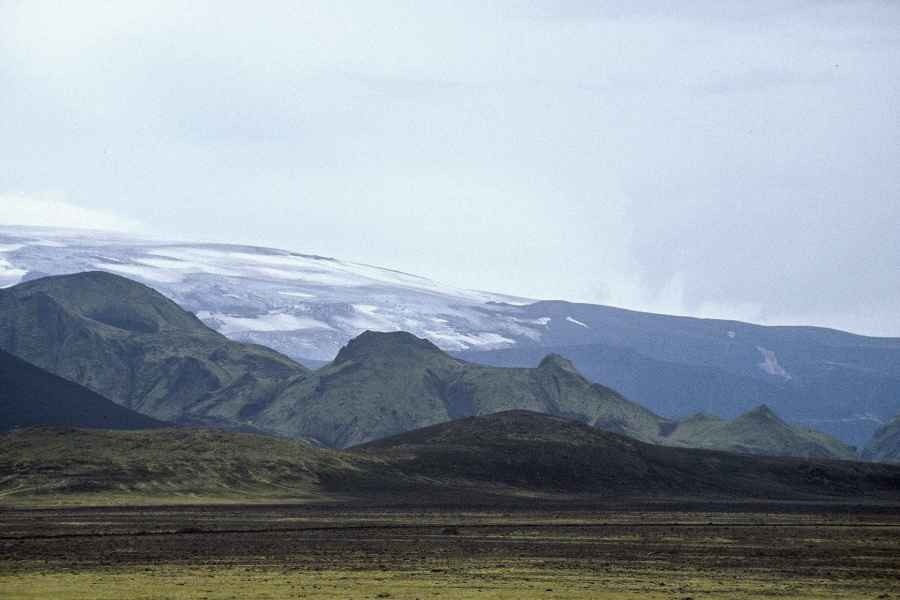 The song goes 'Eine Seefahrt die ist lustig ….'('A trip on the sea is merry') - but that is nothing compare with a bus journey from the Icelandic highlands to Reykjavik. The bus stopped in front of the hut in Hvangil, we get in and the bus driver accepts our tickets for the journey Porsmörk - Reykjavik without any questions. Probably, he simply told himself that a ticket is a ticket, and his English was not much better than our (non-existent) Icelandic. So this solution suited both sides. He could set off. Doors to, turn the ignition key and ….nothing happens. The same procedure once again … nothing. A short jerk of the gear lever, the bus begins to roll down the hill / slope - and the engine starts. The drive across the jeep track can begin. The passing scenery is magnificent. Glaciers alternate with blue or grey rivers and green mountain ridges. The speed at which our driver drives through glacial rivers is impressive - and that with one hand holding his mobile phone. Travelling in the No. 13 bus is a real experience!

Four weeks later, on our way back from Greenland, we again stayed in Iceland for a couple of days. A wonderful experience then was a ride through the Mosfells Valley, on Iceland ponies. That certainly won't be our last time on the back of an Iceland pony. 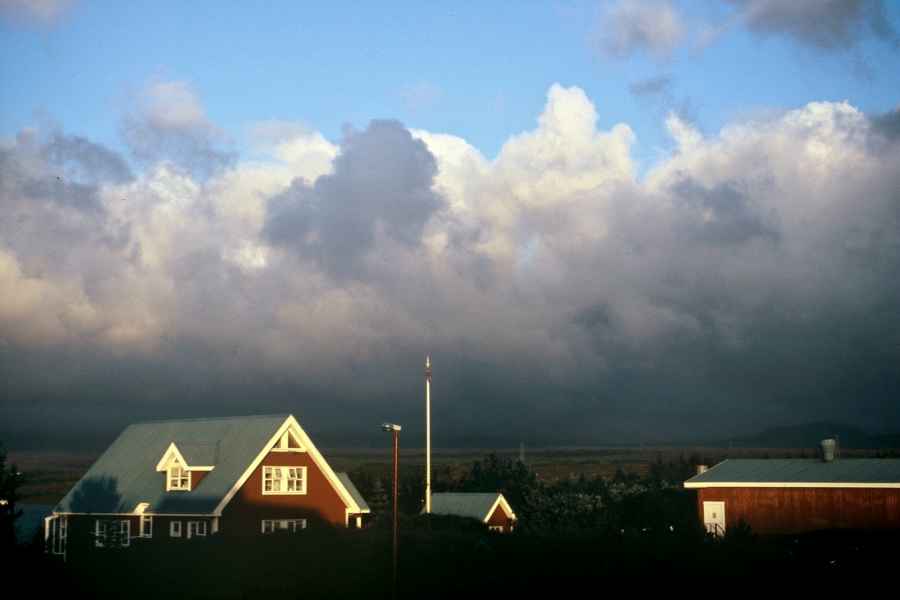 After this stay in Iceland, I finally know what a 'low over Iceland' is. Innumerable times, we were wet through to our skins. Even the allegedly waterproof jackets reached their limit sometime. In Greenland, we learned (from Icelandic tour guides) that we had run into the only bad days of that summer. Iceland had had absolutely its 'summer of the century'. The local newspapers called it a 'Majorca summer'. It was so hot that tours of the glacier, by snow-mobile had to be stopped at one stage.